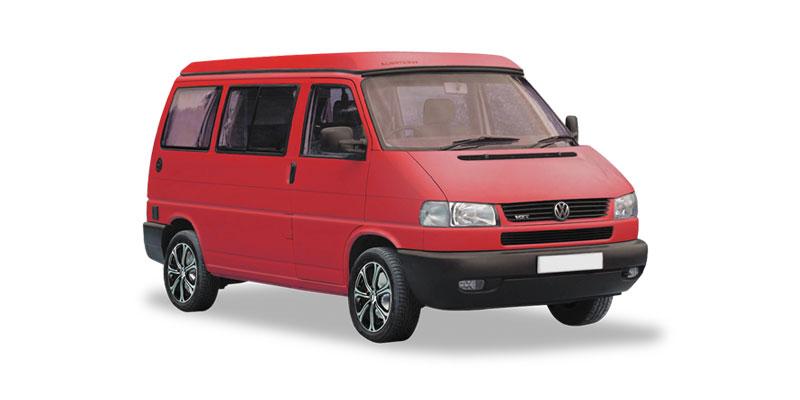 History of the Volkswagen T4

When production of the Volkswagen T4 started in August 1990, also known as a Eurovan in the USA, it was a huge leap of faith that the fans of the rear engined Transporters would accept it. After a slow start the T4 has become a very popular model with VW fans, tradesmen using them as a works van, motorhome owners and people looking for a truly multipurpose leisure vehicle.

T4 was a completely new model using modern ideas, many taken from the Golf and Passat range. Being front engined, front wheel drive and having a monocoque construction, broke nearly all its links to 50 years of heritage.

Built at the dedicated Transporter factory in Hanover, Germany, it was available in SWB (Short Wheel Base) or LWB (Long Wheel Base). The range (Excluding custom built models) consists of:

Again, as with its predecessors, it became a firm favorite with the vehicle conversion companies. It has been made as refrigerated vehicles, police and ambulances, taxis, disability vehicles with wheel chair ramps etc. It even became the somewhat unique Razor Back, which was built as a brewery delivery vehicle with lowering floor to load/unload barrels of beer.

Increasingly VW T4 vans are being converted into campers and day vans.  There are a growing number of garages speciliaisng in T4 camper conversions, such as Vanworx, but many owners prefer to choose a DIY conversion kit.

1990 to 1995  Few model changes. The range was offered with a choice of petrol and diesel engines.

The Caravelle VR6 was introduced necessitating a longer nose to accommodate the new engine. The longer nose was used on the Caravelles thereafter, and the short nose T4 was used for the lesser models.

2003  Summer saw the end of T4 production in Hanover, to make way for it’s newer brother, the T5.

The chassis number, or VIN, can be found on the top (offside) of the dashboard and is best viewed from outside.

Analysing the chassis number will reveal important information about the van...