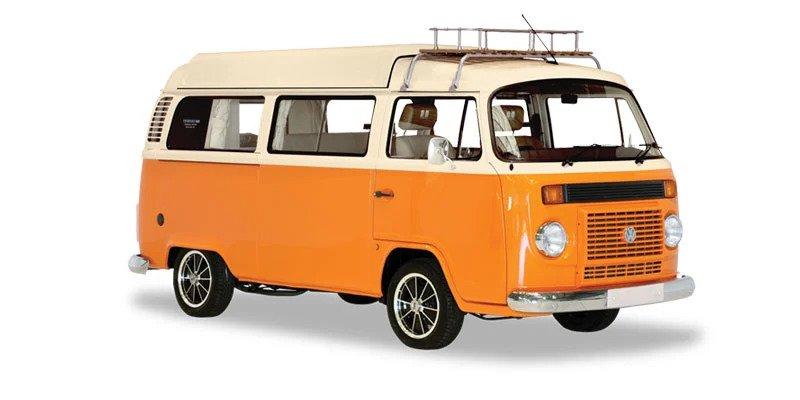 During the 1970’s, 80’s and early 1990’s VW Brazil produced a version of the Splitscreen T2. But beware, many of the body panels are unique to Brazilian models. In 1995, the German looking T2 Bay Window was put into production at Sao Paulo Brazil. Known as the T2c, it came with the 1.6 L air-cooled engines for the Brazilian market, and with the water-cooled 1.8 L inline four-cylinder 67 kW (91 PS; 90 bhp) fuel-injected engine for the Mexican market. This is a real hybrid vehicle using parts from various years and models! The steering and suspension is fundamentally the same as pre 1967 German Splitscreen, sporting king and link pin from suspension and a gearbox reminiscent of the 1302 and 1303 Beetle gearbox. Many of the body panels are the same as the German produced mid 1970’s T2.

The switch from air-cooled to water-cooled engines

The end of the Volkswagen air-cooled engine on a worldwide basis was celebrated by a run of just 200 Special Edition Kombis. An exclusive silver paint job, with limited edition emblems marks them out as all other Kombis are produced in white!

As December 2005 saw the end of air-cooled VW’s being produced the Brazilian Kombi from then on was powered by a 1400cc Polo or Fox engine. Still sporting the 4-speed gearbox, the combination sounds a bit underpowered, but in fact makes a really respectable drive.

Body styles and variants for the T2c Brazilian Bay

Volkswagen Brazil offers a limited range of models or variants of the VW Transporter, here are some of the factory combinations

Commercial use of the Brazilian Bay

If you ever visit Brazil you will see the Kombis in daily use as delivery vehicles, taxis, police cars, lots of yellow painted ones at the airports and a few of the long since produced pickups with hand painted wooden sides.