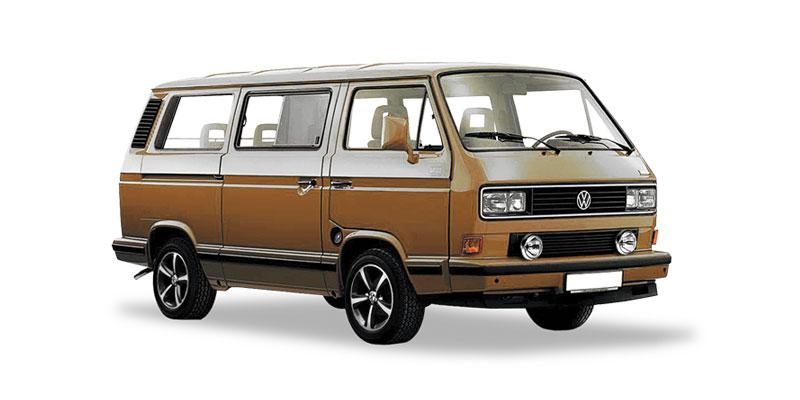 History of the Volkswagen T25

First built in August 1979, the T25, also known in the USA as a Vanagon, and in Germany and the majority of Europe as a T3, was a huge success and a radical jump forward from the evolution between Splitscreen and Bay Window Campers and Transporters.

As you will be able to read below, by the end of production, the humble 1979, 1600cc CT model was replaced by a fuel injected 2100cc DJ unit and the practical, but not great, off road 2 wheel drive configuration was available as a four wheel drive (4x4) model known as a Syncro. The Syncro had a very respectable set of gearboxes and running gear produced in Austria by Puch. The syncro was available in 14 inch and 16 inch wheel sizes. As with the 2 wheel drive version, it could be ordered as a van, window van, microbus, Caravelle, Carat delux microbus, single cab pickup, double cab pickup and even in mid and high top versions, as well as a VW approved camping version made by Westfalia in Germany.

May 1979  Hanover built the first models of the ‘third’ generation Volkswagen Transporter. It was a total redesign of the old Bay Window, being wider with larger windows and tailgate, and a new front style. Very little was carried over from the previous model. There was new suspension, which moved away from the torsion bar system. Powered by either a 1600cc 50bhp (37kw) or 2000cc 70bhp (51kw) air-cooled engine.

February 1981  Introduction of a water-cooled 1600cc diesel engine with 50bhp (37kw). This engine originally came from the Golf.

September 1981 Introduction of the Caravelle, offering a more luxurious interior.

1982  End of production of air-cooled engined models in Germany.

August 1983  Introduction of a higher spec ‘Caravelle’ with the option of a 4 lamp square grille.

1985  The year of a full ‘revamp’ of the model. Changes included new exhaust systems, front suspension, sliding door locks, fuel injection systems, to name but a few. It is said over 1000 changes were made in this year alone. 1985 also saw the introduction of the Syncro, a four wheel drive vehicle, which was built with Steyr/Daimler/Puch in Austria. Capable of climbing a 54% gradient utilizing a center viscous coupling.

1986  ...Onwards vehicles did not suffer so badly with rust as a result of a new rust treatment in the production process.

September 1990 The last T25 left the Hanover factory, however production carried on in South Africa until the end of 2002. The last Syncro was built in 1992.

The chassis number, also known as the VIN, can be found stamped inside the offside door pillar.  Find the 10th digit of the VIN (Vehicle Identification Number) and, using the table below, this digit will give you the model year.  Please note that the build dates run from August to July not January to December, so for example a 1981 model could have been built in late 1980.

The last 6 digits are the serial nos.

This can be found stamped on the top of the crankcase, centrally above the crankshaft pulley/fan on all petrol engines, and also stamped on the engine block between the injection pump and vacuum pump on all diesels.

Please note, most of the versions sold as “Campers” started out as vans or microbuses and were converted by companies such as Viking, Devon and Bilbos. They very often painted the bottom half to give it a distinctive 2 tone look, but almost certainly not using original VW colours!  JK supply a wide range of camper interior parts for conversion and restoration. Paint code information is correct to the best of our knowledge, however, we accept no responsibility for erroneous information.