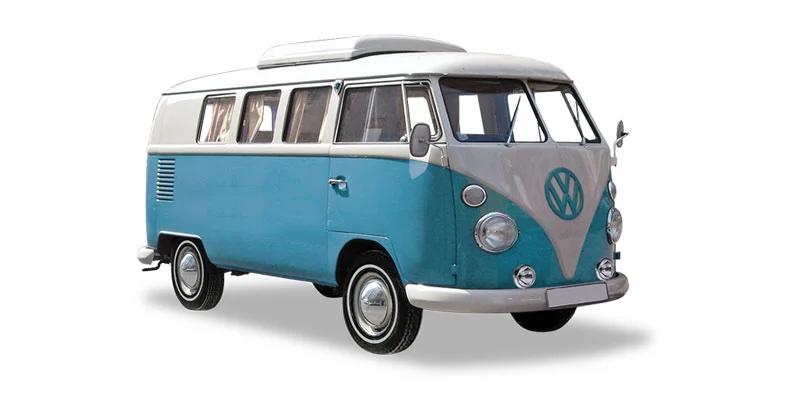 History of the Volkswagen T2 'Splitscreen'

The first generation of the Volkswagen Type 2 was available as a van for work or as a people carrier. It had the distinctive 2 front windscreens and the V shape on the front panel. Around the world it became affectionately known as the Bus, Barndoor, Kombi, Bullie, Microbus, Splitscreen, or Splitty, Samba, 21 Window and 23 Window, to name just a few of its nick names. Initially built until 1956 at Wolfsburg; from1956, it was built at the completely new Transporter factory in Hanover. Sharing many components with the VW Beetle, the first Transporters were powered by a 25Hp 1100cc Volkswagen air-cooled engine mounted in the rear. This was upgraded to the 1200cc 30 Hp engine 1953. Up until 1955 they were often called the Barndoor due to the enormous rear engine lid, they also had a flat roof at the front, while the later versions had the distinctive peak or overhang over the 2 front windscreens.

During the 17 years of production there were a great many versions produced by VW, there was the basic panel van, an entry level Kombi or Bus is the 11-window. The Deluxe model featured eight rear side windows and two rear corner windows, making it the 15-window (not available in Europe). Meanwhile, Samba, officially called the sunroof Deluxe, came with eight small skylight windows giving it the name of the 23-window. From 1964 the wider tailgate meant the rear corner windows were discontinued, making the post 1964 models the 13-window and 21-window.

If you would like a more detailed year by year history of the iconic Splitty, please read below where you will find a list of key dates in the production of the Splitscreen model along with the chassis numbers for the relevant years.

Volkswagen offered a huge range of models or variants of the VW Transporter, here are some of the factory combinations:

Because of the style of the VW Transporter and the fact that VW were very relaxed about 3rd party companies converting them to alternative uses, they became a variety of specialist vehicles such as, refrigerated vans, hearses, ambulances, police vans, fire engines and ladder trucks.

There was also a small ‘army’ of convertors around the world turning both vans and buses into campers. These varied drastically in quality and luxury. Some of the well-known UK converters were Danbury, Devon, Dormobile and Canterbury Pitt.

February this year saw the first panel vans roll off the production line, followed in March by the Kombi and in May the first Buses or Microbuses. The engine size was 1131cc.

June this year saw the Samba Bus roll off the production line and in December the first Ambulances were built.

The only major change this year was the introduction of a larger (84Ah) 6 volt battery.

1955  Was the end of production of the Barn Door style models.

This year saw the change in chassis numbers (no more '20' prefix), but the most important change was the moving of vehicle production from its birth place at Wolfsburg to a new factory in Hannover.

Introduction of the Crew Cab or Double Cab pickup. The bumpers were changed to a more robust style and all gears became fully synchronised.

This year the 34 Hp engine was introduced and flashing indicators replaced the semaphore.

Petrol gauge becomes standard fitment, an optional 42 Hp engine was available and the front bench seat was made to hinge forward.

1500cc engine is introduced, the front indicators are made larger to the 'fish eye style'. Panel vans are made available with a sliding door and the tailgate is enlarged as standard.

You could now order patterned seat covers, the windscreen wipers were greatly improved along with the heating system.

The 1500cc engine was improved to give 44 Hp. A two speed wiper motor was introduced along with a foot switch to dip the headlights. The pickup and crew cabs had a larger rear window introduced.

At last 12 volt electrics were introduced.

The end of the Splitscreen production.