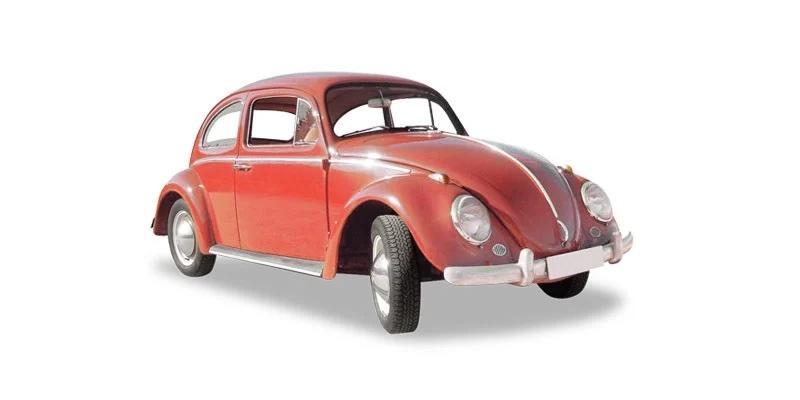 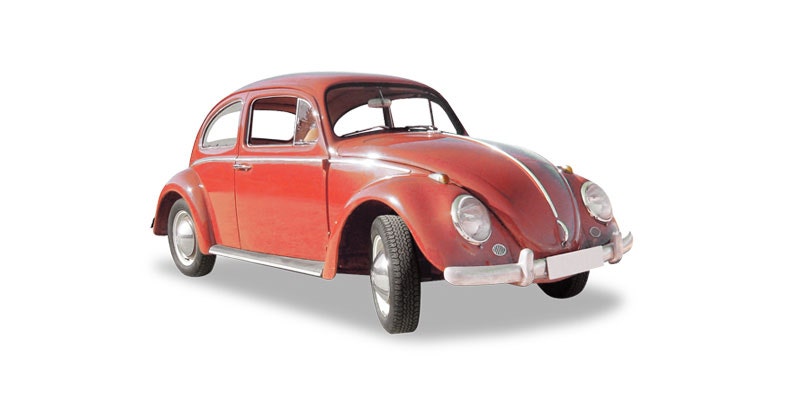 Need insurance for your vehicle? 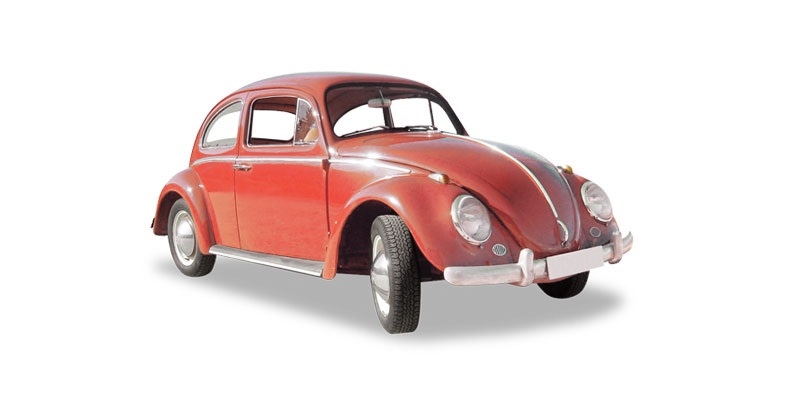 The VW Beetle has become an iconic vehicle worldwide and, through its lengthy history, has amassed a loyal following from VW enthusiasts and casual car owners alike. Known by many names, the Volkswagen Beetle – shorthanded as the Type 1, or T1 – started its long journey as the “people’s car”, or volks wagen, in Germany. Given the curvy form designed by Ferdinand Porsche, and the association with affordability, the T1 assumed many names beyond its German title Kafer. In the USA, especially in coastal regions, the little car was commonly known as the Bug, or salon. In England, however, it was immortalised as the Beetle. The British Army even scaled its interest in the small car with a tall order of 20,000 cars in 1946, introducing it as an export three years later. This namesake – a rare feat in car manufacturing – is the result of a massive cultural interest and decades where the VW Beetle played a central role in the movies, music and marketing.

A wealth of enthusiasts, this car became a firm favourite with kit car builders, particularly because of the floor pan and running gear, which can be used without the body being attached. Known for its many forms, the Beetle was popularly turned into the likes of Porsche 356 replicas, beach buggies, and Nova kit cars to mention just a few. This curvy creation was more than a statement of taste but made its mark on the hearts and households of American and British culture.

When worldwide production ended in 2003 in Mexico over 21 million air-cooled Volkswagen Beetles had been produced. When the classic car was retired Volkswagen cited sloping sales; yet this wasn’t the end of the road for the T1. Its exit from production hasn’t halted its enthusiasm amongst fans, where the VW is somewhere between classic and vintage, and goes handsomely for second-hand.

Nowadays reliving a resurgence of sorts, the Beetle is getting even more mileage as on the specialist circuit. During eight decades of manufacturing came a whole variety of models, ranging from 25Hp through to the 1303S or the Super Beetle with its Independent Rear Suspension (also known as IRS). Salons, sunroof models, cabrios and even specialist versions as police cars, German post office delivery vehicles and in Mexico City, the green and white Beetle taxi, with its missing passenger seat, was a common sight until recently. 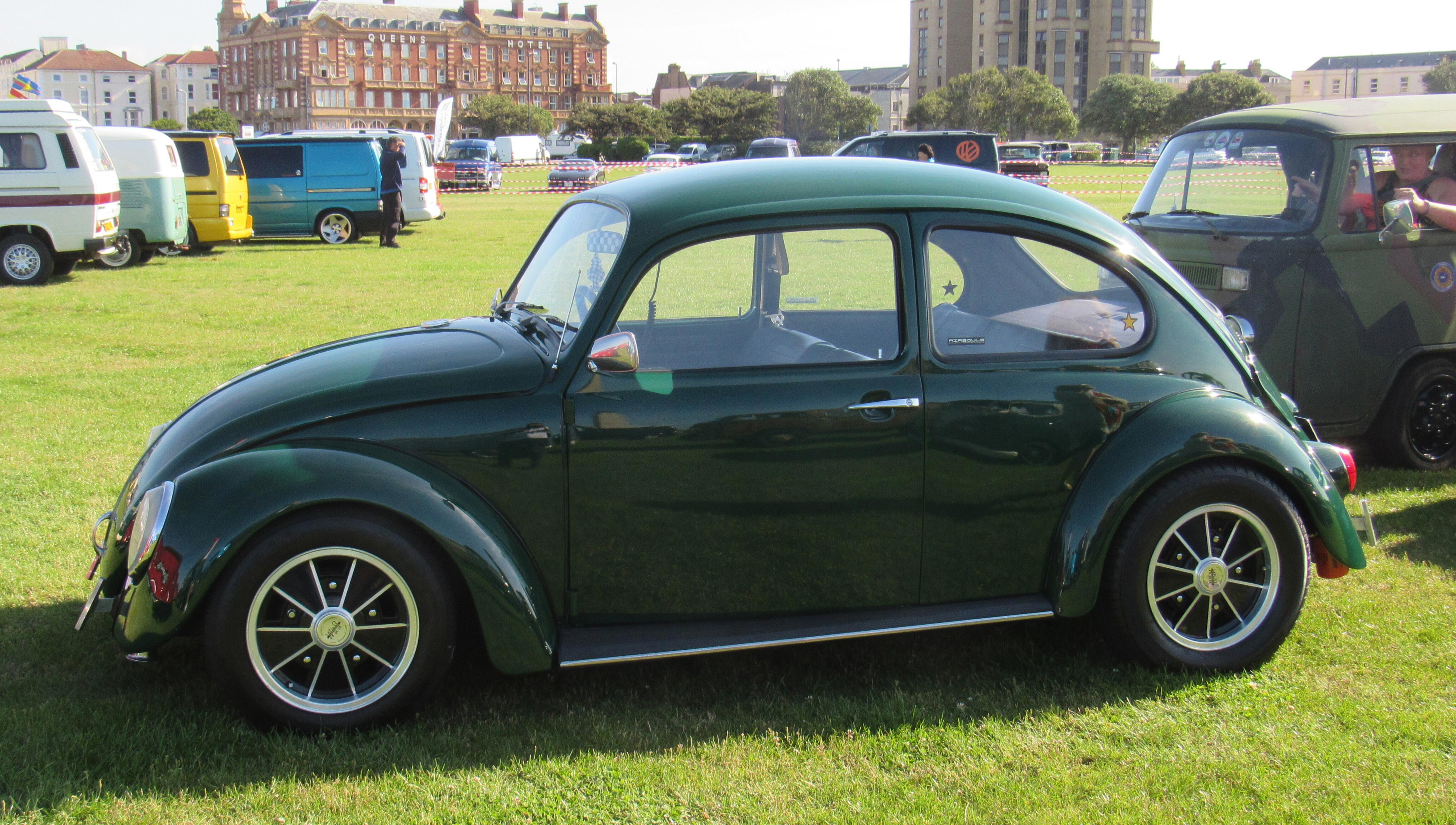 Fashions change and over the years the VW Beetle, or the Bug, has seen styles come and go. Initially commissioned in the 1930s, the Beetle first hit the streets as a practical and reliable car. In the 1950s, the shiny yet curvy style of the Beetle became a standard. By the 1960s the trend to ‘soup them up’ and build street legal drag racers was taking hold in the USA, especially on the West Coast. This was the time of legends such as Gene Berg and cars such as the Empi Inch Pincher. In the UK, smaller tuning companies such as Speedwell developed carb tuning kits and alloy wheels. The Beetle, outgrowing its roots, became a casual success in car craft for its unique style.

By the mid-1970s the Bug was being used for time trials and autocross racing. A darker moment in the custom scene, the 1970s introduced the Beetle as an imitation of something greater: fitted with the fat whale tailed body kits, the Beetle at night seemed to morph into a Porsche 911. However, as the whale tail was strapped on, Californians developed what has come to be known as ‘Calook’ or the Californian Look.  Lowered, smoothed out, de-chromed, alloys, neat interiors and performance engines were the main features of the Calook scene.

From the mid-1980s in the UK, these body kits fell out of fashion and the Calook scene became popular. Since then there have been a variety of fashions, with the VW drag racing scene now in its fourth decade. We’ve seen ‘Old School’ lowered, with lots of chrome and accessories, and a neat and tidy look. The ‘Rat look’ is almost the opposite, characterised by its flat matte paintwork and original, if lived-in, interiors; yet it shares the same passion for vintage accessories as previous generations of VW! Calook, in its various rebirths, has been a steady influence. There seems, however, to be a strong movement with enthusiasts to revert to a more traditional, stock look.

Notes on the VW by model: When trying to identify a Beetle, bear in mind that on all almost models (except 1302/1303) most body panels are interchangeable, so if a Beetle has sloping headlights, don’t assume that it is a 1957>1967 model. Many late Beetles have early wings, lights, bonnet, engine lid and front and rear valances, making them at first glance identical to a 1964 to 1967 model, but generally if it has an external fuel filler cap it is likely to be built between 1968 and 2003.

A generational car unlike any other – the Volkswagen Beetle has lived through many changes in its eight decades on the production line.

Here are the main changes that took place to the Volkswagen Beetle during its eight decades of production.

1936 > 1952 ‘Splitscreen Beetle’ The Beetle story started in the early 1930’s, but production started officially in 1936. The Second World War all but stopped production until the British army rebuilt the factory and production commenced of the ‘Splitscreen’ Beetles (named after the shape of the small ‘split’ rear window). These were very basic cars with engines from 985cc (24bhp) to 1131cc (25bhp) but are rare and very desirable.

1953 > 1956 ‘Oval Beetle’ Very similar to the Splitscreen, but with the split removed from the rear window making it an oval. Small developments aimed at improving driver comfort and making the Beetle appeal to foreign markets, including a new 1192cc (30bhp) engine.

1957 > 67 Little difference in appearance from the Oval Beetle, the biggest being the rear window, which was enlarged in August 1957 to the large rectangular shape that would remain for the remainder of production.

The windscreen and side glass were also enlarged in August 1964. These Beetles still retained the sloping headlights, long bonnet, link and king pin torsion bar front suspension and swing axle torsion bar suspension at the rear and 5 bolt wheels as previous models, but in Aug 1966 the link pins were replaced with ball joints and the wheels used four bolts instead of five. Engine options were now 1192cc (34bhp), 1285cc (40bhp) and in Aug 1966 the 1493cc engine with (44bhp).

1968 > 2003 August 1967 saw the first major styling change with upright headlights, a shorter bonnet and engine lid, plus an exterior mounted fuel filler cap. These models retained the torsion bar front suspension and swing axle rear suspension, which remained until the end of Brazilian production in 2003. The only exceptions were the semi-automatic Beetle which came with I.R.S rear suspension and the 1302 and 1303 models which used front coil springs... (see below).  Engine options for these were 1192cc (34bhp), 1285cc (44bhp), 1493cc engine with (44bhp) and 1584cc (50bhp).

1971 > 72 ‘The 1302 Beetle’  In an effort to make the Beetle more practical and improve sales, VW offered a restyled version alongside the regular Beetle which was badged the 1302 (1285cc) and the 1302S (1584cc). This had a more bulbous front bodywork but retained the flat windscreen and the torsion bar front suspension was replaced with MacPherson struts with coil springs, similar to the VW Golf.

The rear suspension was also the much improved I.R.S torsion bar system similar to the Porsche 911 of the same era. These changes improved the handling, ride comfort and stability, plus the front luggage area increased from 5 cu ft to over 9 cu ft, however, the styling proved unpopular and it was replaced after 2 years by the 1303 model.

The classic styling of the torsion bar Beetles helped them outlive the improved design of the 1302/1302 ‘Super Beetles’ and production was ended in 2003 to free up factory space for the front engined, water-cooled ‘New Beetle.’

The chassis number is very useful when ordering parts for your Beetle as it gives the date of manufacture, model type.  These can be found in two places. Firstly, in the front luggage compartment, by the bonnet lock and secondly, under the rear seat on the central tunnel. 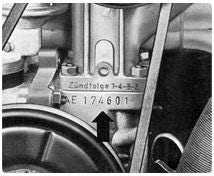 The engine number can be found stamped on the top of the crankcase, centrally above the crankshaft pulley on the engine.