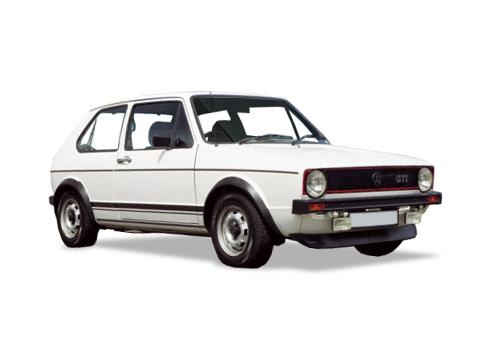 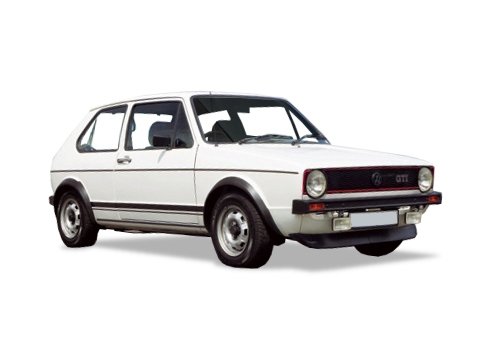 Designed by Italian car designer Giorgetto Giugiaro, the original Mark 1 VW Golf was introduced back in 1974 and it was one of the earliest hatchbacks on the market. Today, many would argue that it was this car that caused the real growth of the hatchback market.

The car was so popular, in fact, that just two years after it first appeared in showrooms, Volkswagen were already producing their one-millionth Golf.

Although initially designed as a practical family car, over the years the VW Golf has also become known as an enviable performance car. In 1975, the first VW Golf GTI was created. This debuted at the International Motor Show in Frankfurt, Germany. The car was a massive success, and VW went on to sell 461,690 Mark 1 GTIs over six years, until production stopped in 1983.

As well as the GTI, VW have created various other editions of the Golf since 1974. These have included estates, the Golf Cabriolet, the Mark 2 Rallye, and several anniversary/special editions.

Today, more than 35 million VW Golfs have been sold since the car’s birth in 1974. According to Volkswagen, this equates to a Golf being sold every 41 seconds!

Living through many iterations, the VW Golf has always felt like a celebrity in car manufacturing.

There have been, in total, eight editions of the illustrious VW Golf, running from 1974 to the present moment:

The rising popularity of the Golf has been an incredible journey since its humble beginnings. The VW Beetle’s successor has long been a worldwide best seller, which has allowed the car to grow throughout eight generations so far. Explore the long history of the VW Golf Mark 1 up to the Mark 8, and discover insights into how the German manufacturers have kept this fantastic vehicle thriving.

It was March of 1974 that the Mark 1 Golf first rolled off the assembly line in Wolfsburg, Germany. Accompanied with the advertising slogan, ‘The new popular sport: Golf’, the car was described as revolutionary. After the VW Beetle, it was clear that VW were moving from smooth curves to angular points, but the changes were not merely aesthetic. A new vehicle layout was created in the Golf, and instead of an air-cooled rear engine it used a water-cooled front engine. This new car became so popular that an estimated 6.99 million were sold while it was in production.

In 1983, VW decided to present its next model, the Mark 2. This was larger and more aerodynamic than its predecessor. Little was changed where the design was concerned, in keeping with the then VW motto, ‘continuity in the concept, progress in detail and quality.’ Technical upgrades included power steering, the anti-lock braking system (ABS), and the ‘Syncro’ – the first all-wheel drive Golf. A catalytic converter was added in 1984 – five years before they were made compulsory in Germany. Before production ended in 1991, 6.3 million Mark 2 VW Golfs had been sold.

The focus changed slightly in 1991, when VW designed the Mark 3 with safety as a priority. The new car featured air bags in the front from 1992, and changes to the body itself improved the car’s ability to withstand damage from crashes. Side airbags were added in 1996. The Mark 3 also had a wider track, wheels flush with the body, and a wedge shape – all of which gave the car a commanding presence on the road. Other changes included the VR6 6-cylinder engine, cruise control, the oxidation catalytic converter and direct-injection diesel engine. Throughout six years of production, 4.83 million units were sold.

Maintaining much of the signature style of the original Golfs, VW created the Mark 4 in a slightly smoother form. It featured a long roof and steep rear but was less angular than its predecessors. Technical advancements included Electronic Stability Control (ESC) in 1998, it was the first all-wheel Golf with a Haldex clutch, and it soon had a 6-speed transmission. Two special editions were also created in this period. There was the Golf GTI Edition 25, which came on the Golf’s 25th birthday and is now a collector’s item. There was also the Golf R32 in 2002. A total of 4.99 million Mark 4s (including the special editions) were sold before production ended.

The Mark 5 Golf was visually quite different from the earlier models. The bonnet was designed to follow the shape of the headlights, making the appearance more smooth and sporty than it had been before. As well as this change to the design, the Mark 5 also featured several technical innovations. These included rear-side airbags, a 7-speed direct shift gearbox DSG, four-link rear suspension, a panoramic sunroof and a rain sensor. It also saw the introduction of the world’s first Twincharger (TSI). Further editions of the Mark 5 included the Golf Plus in 2006, and the Golf BlueMotion, the CrossGolf, and another estate in 2007. A total of 3.4 million Mark 5s, including the special editions, were sold during its production.

The sixth generation of the VW Golf was presented to the world in 2008 in Iceland. Under the slogan ‘experience value anew’, this new vehicle was marketed as a safe, affordable compact car. Changes to the laser-welded body gained the Mark 6 the maximum score of 5 stars in the EuroNCAP crash test, and this version featured the knee airbag as standard. It also saw the introduction of various assistance systems which appear in all subsequent Golf models. These include, Park Assist, Hill start assistant, the automatic main beam control Light Assist, and the start/stop system. In 2009, the VW Golf Mark 6 was named the ‘World Car of the Year’. A total of 2.85 million models were sold before production ended in 2012.

With a more dynamic design, the front wheels in the Mark 7 were moved forward, therefore making the front overhang shorter and the bonnet visually longer. The car was made 100kg lighter than earlier models, and fuel consumption was up to 23% lower depending on the engine size; environmental concerns became a priority. More assistance systems were introduced, and the interior display was digitized. In 2014, VW took environmental responsibility to a new level, with the all-electric e-Golf2 and Golf GTE3 with plug-in hybrid drive. Around 6 million VW Golf Mark 7s have been sold.

Unveiled in October 2019, the Mark 8 Golf is Volkswagen’s answer to the increasing, worldwide demand for more environmentally friendly cars. While there are petrol and diesel models to start with, there are also four hybrid models, including a mild-hybrid and plug-in hybrid. There is also an entirely digital interior display, including a 10” instrument display and a 10” infotainment touchscreen. Going on sale in 2020, the Mark 8 is expected to succeed economically in much the same way as its predecessors.

Over the last 46 years, in addition to the standard VW Golf models, Volkswagen have brought out a series of special editions of this prestigious car. Some of the most popular types include:

Each of these had varying features that helped them gain popularity, from the convertible roof of the Cabriolet to the spacious estate models. But, of course, it’s the GTI editions that have gained the most fame over the years, owing to their impressive performance features.

The VW Golf GTI first appeared back in 1975 at the International Motor Show in Frankfurt. Since then, all eight models of the car have had GTI editions, all of which have been extremely popular. The reason for this is because they are affordable, daily-driver cars that blend a sporty performance with practicality. They feature excellent handling, without compromising on their driveability and suitability as an ordinary car.

As the VW Golf continues to go from strength to strength, we look forward to seeing what this well-respected German car manufacturer has in store for future models.