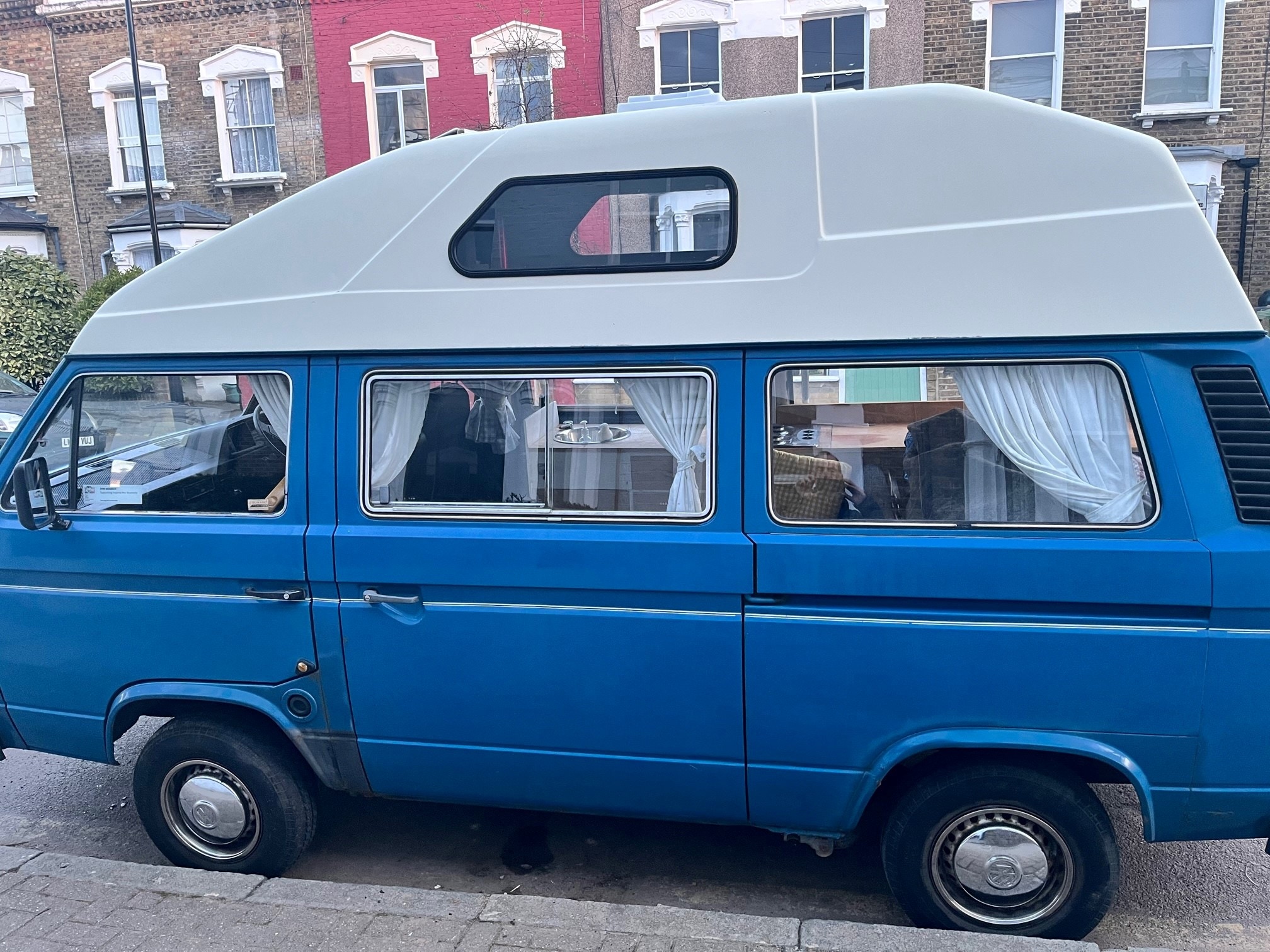 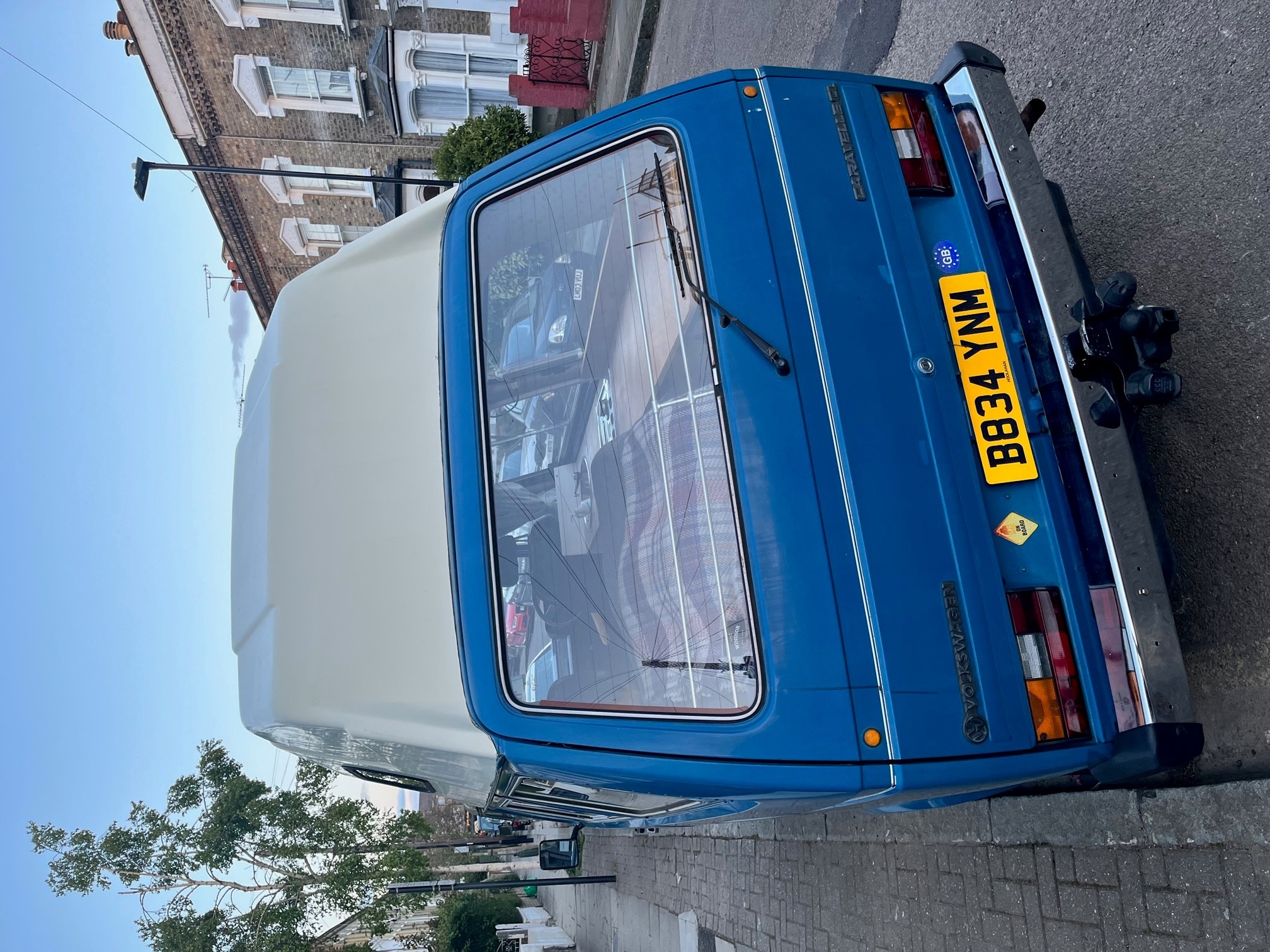 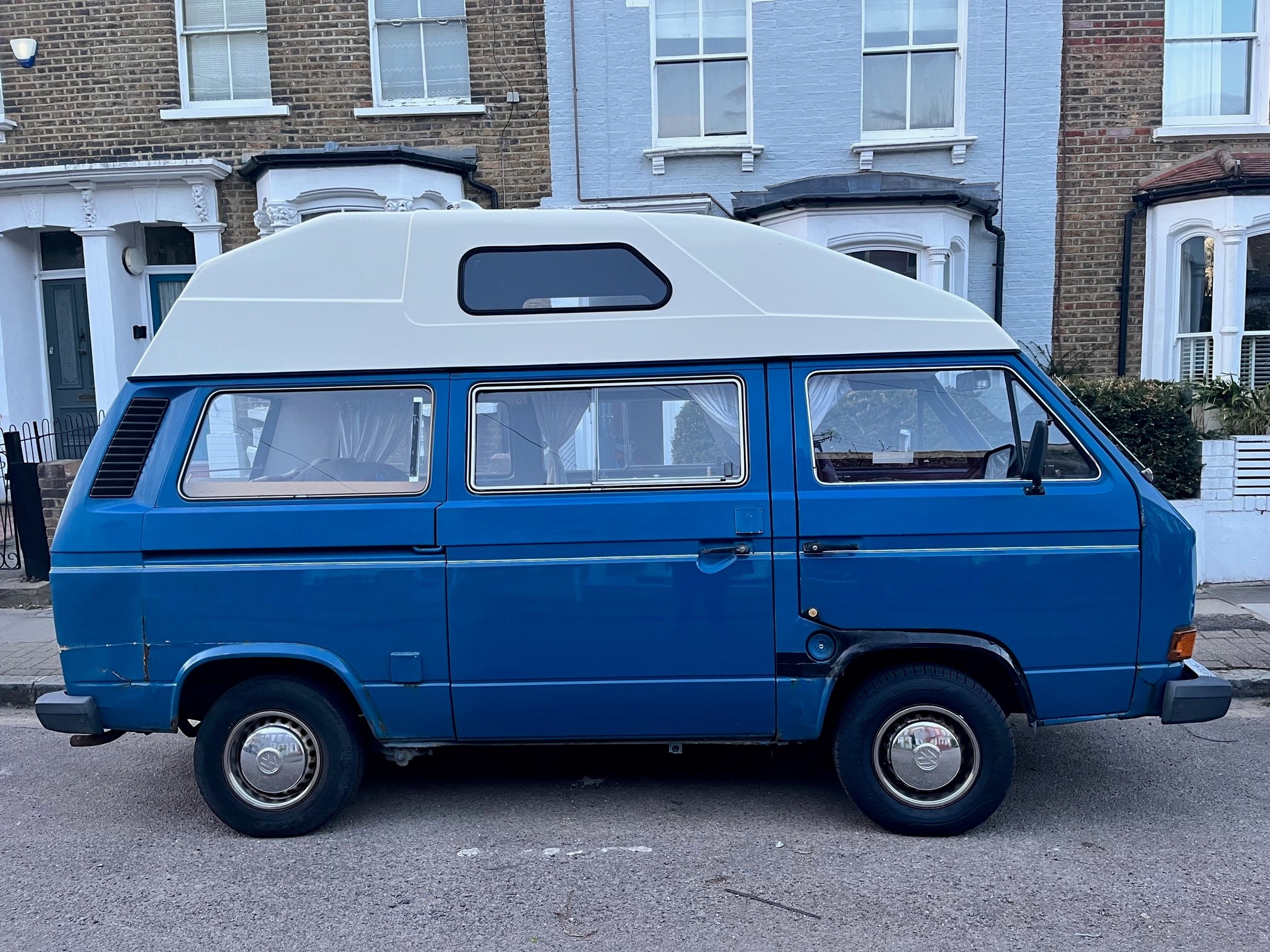 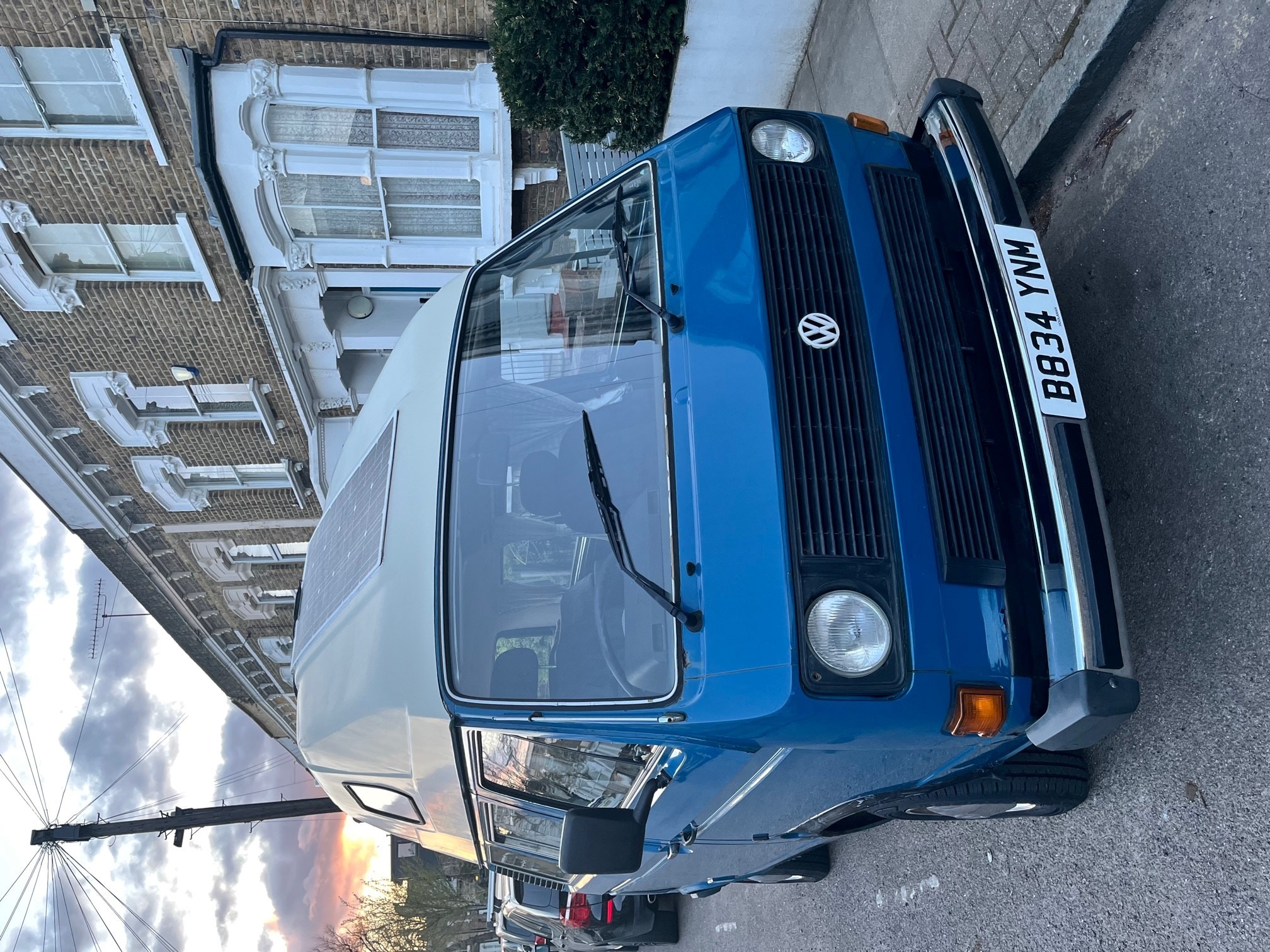 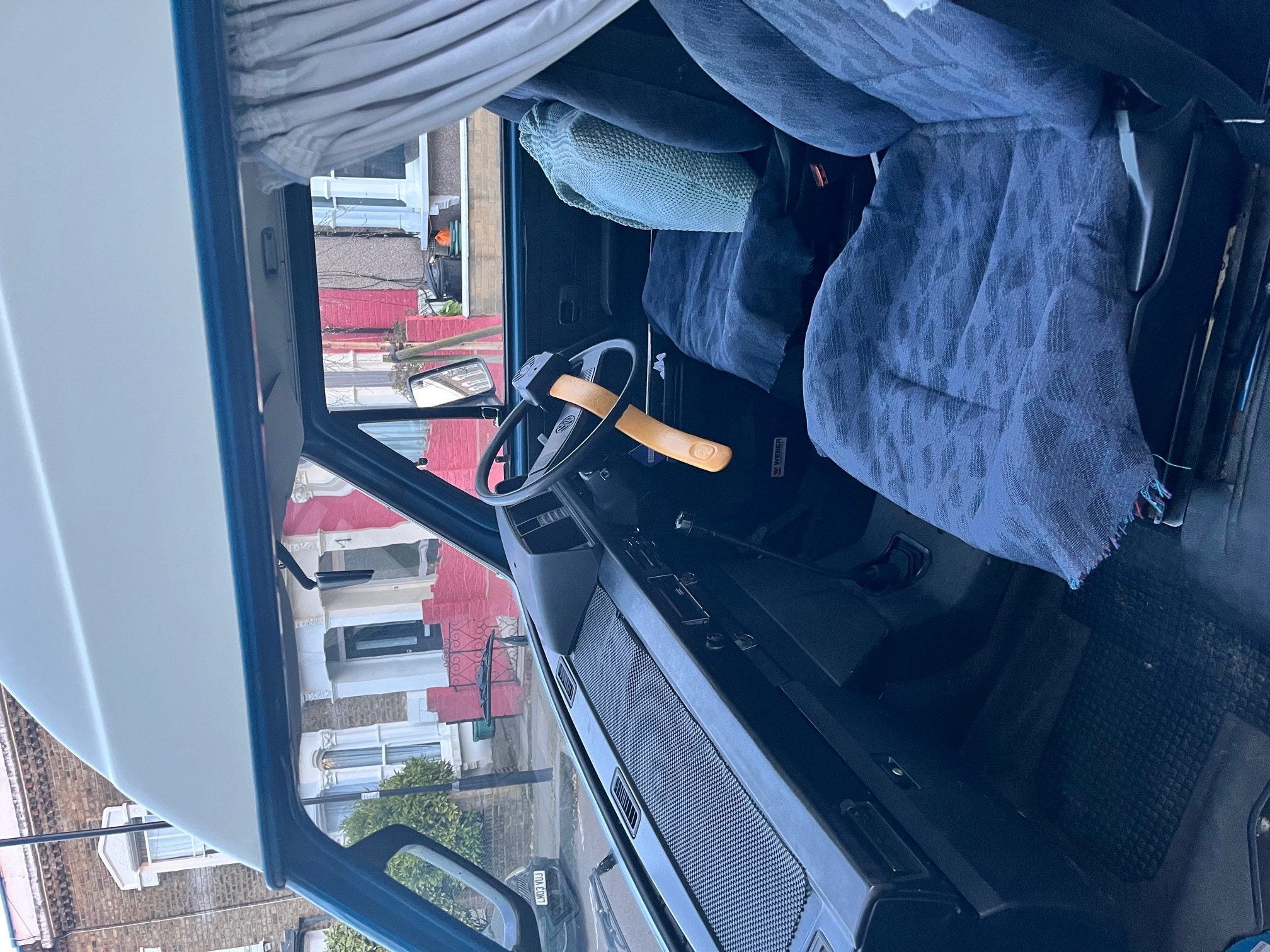 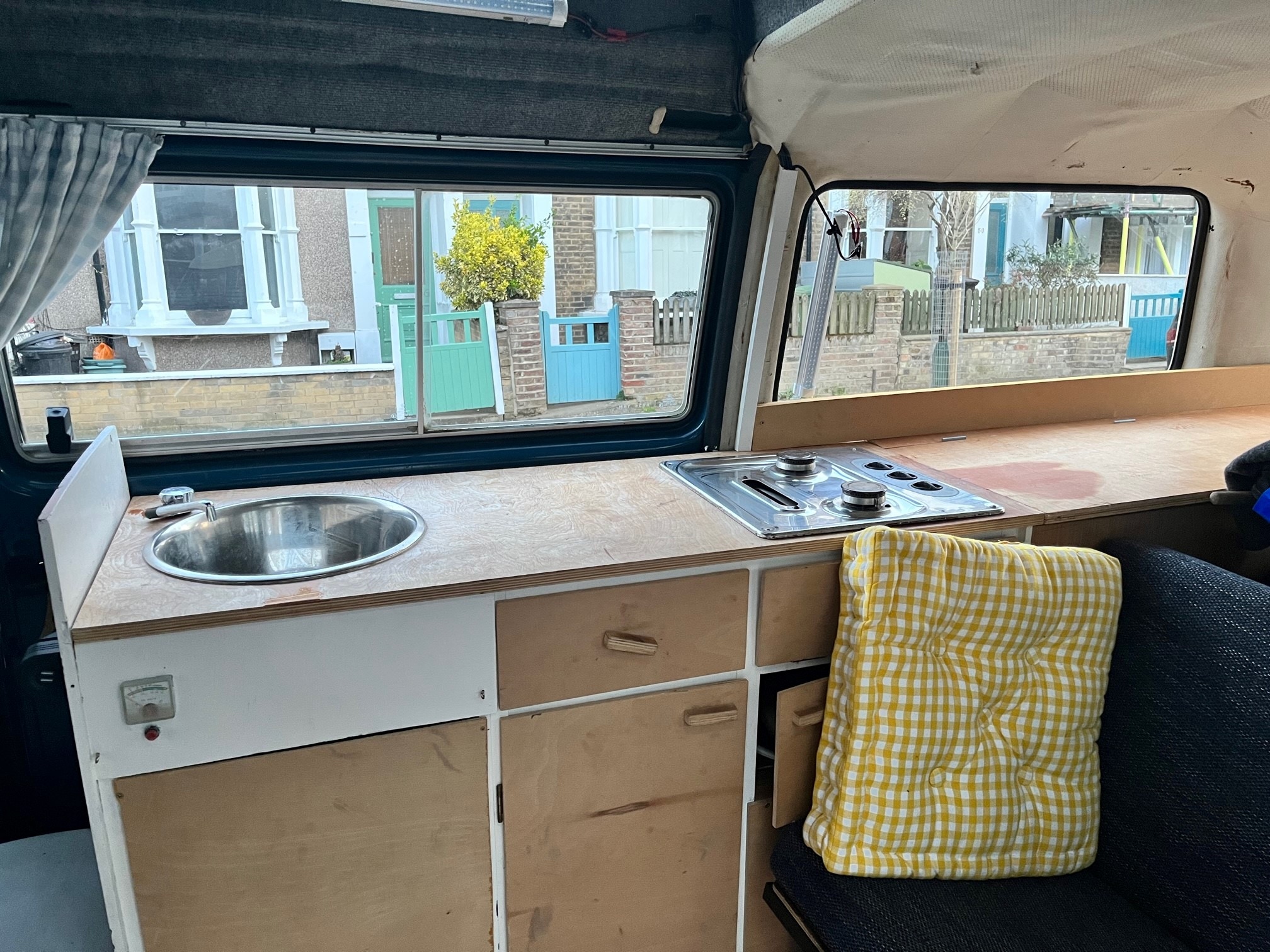 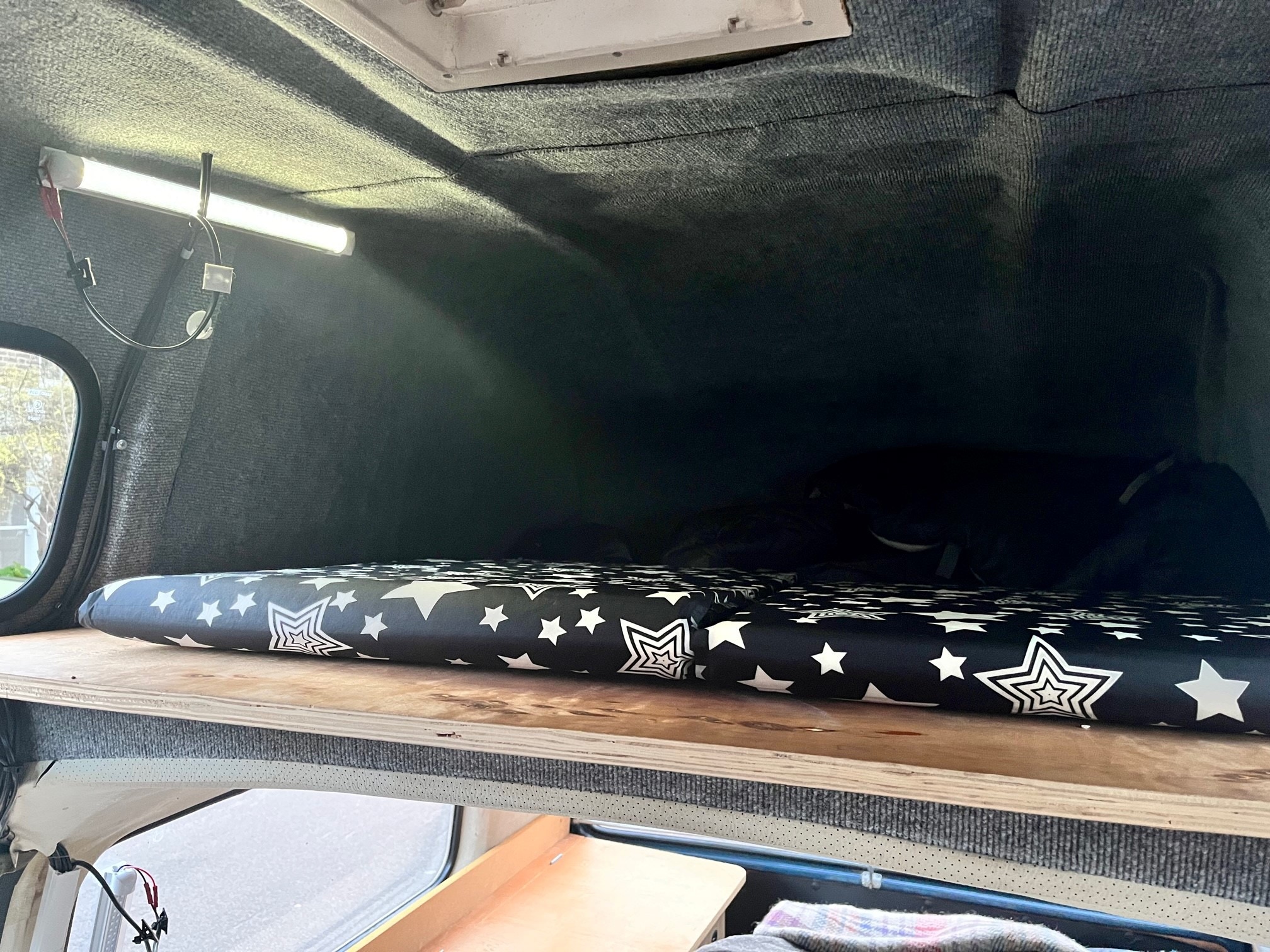 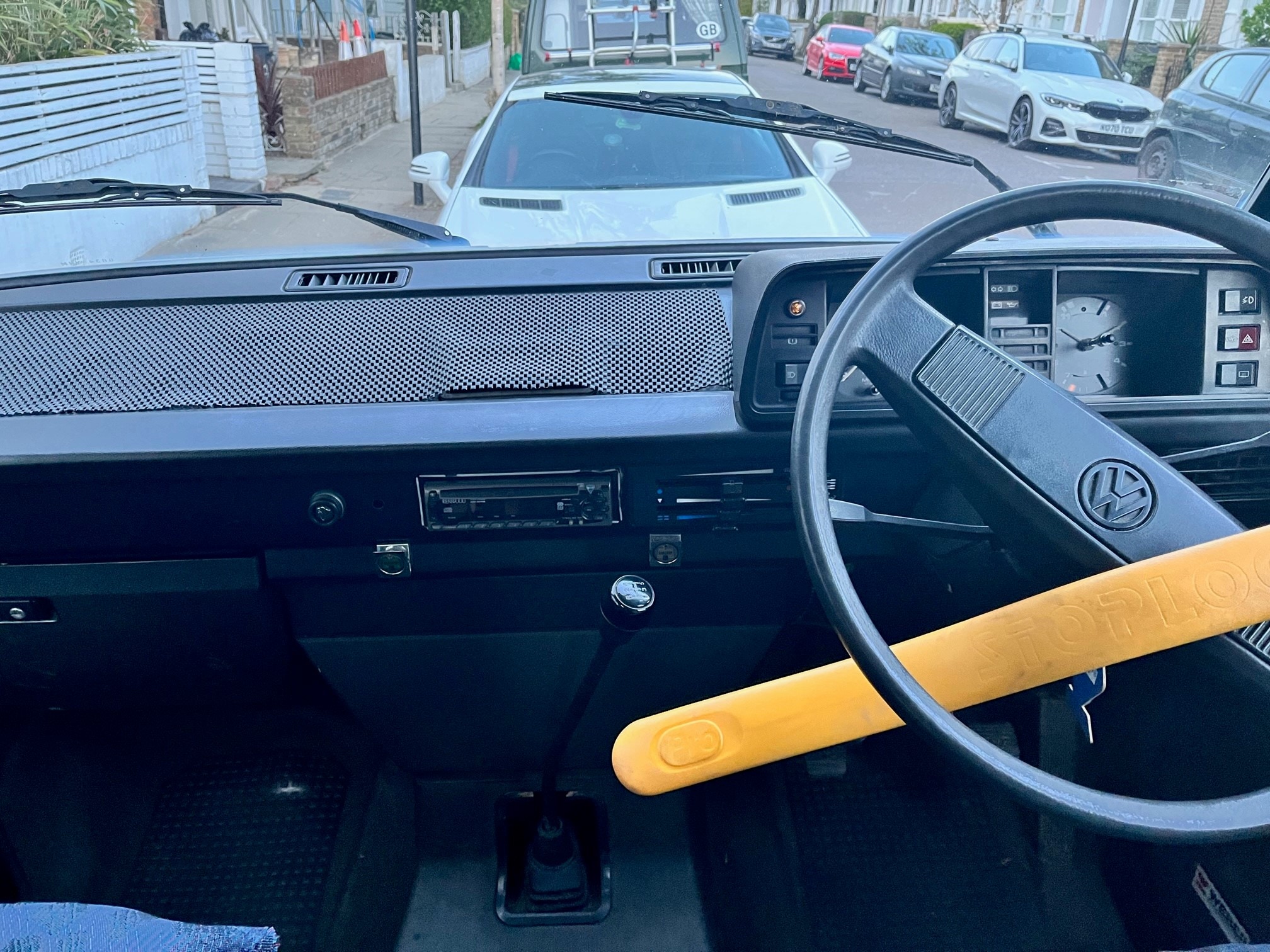 1985 T25 Caravelle High Top
175k miles
Petrol (Unleaded, drinks both E5 and E10, it seems to run a touch more nicely on the pricey stuff!)
1.9l reconditioned engine (probably done ~20k miles)
High Top (kids sleep up top)
Rock'n'roll bed
Sink / electric tap
2 ring gas hob, plus grill
Water containers
Storage compartment
Passenger swivel seat
Kick-plate for drivers swivel seat
Curtains and sun-screens (there's also a full set of spare curtains made by my Mum!!)
MOT January 2023
Fully serviced Jan 2022
Extremely reliable starter, has never not started on me
Fun to drive
Has some decent acceleration and doesn't struggle on hills
Not fast on motorways, you'll need to be happy at 55mph. It'll go faster, but the wing mirrors need stabilised and with the high top you don't want be going over 60 as it gets pushed around a bit.
Kenwood stereo + cd player. Speaker wiring is a bit ropey.

Well, i'm not really sure where to start with this one. This is "Marianne", or as the kids call it "Fat Piggy".

She (am I allowed to call a campervan "she"? yes I am), was a bit of a lockdown project, bought from a young couple down in Exeter who had moved there from London to learn how to grow salad leaves commercially. They were really sad to see her go. Being very naive about these things I didn't really notice how bad the electrics were at first. Numerous projects over the years had left a lot of wires, some of which seemed to do things with the leisure battery that was actually just a starter battery. Some of which just didn't do anything and ended in random places, including scarily enough the engine bay. So my first port of call was a wonderful chap called Steve who runs a business called AutoLeck down on the Isle of Sheppey (https://www.autoleck.co.uk/). Apart from telling me I was an idiot, in the nicest possible way, Steve completely rewired the van, making it safe, installing a solar panel on the roof, a solar controller, a relay, a proper leisure battery, lights, and USB chargers. He also fitted a new Rock'n'Roll Bed, proper rear seatbelts, and gave me all kinds of pelters about how the front two seats are probably from a Ford Granada (they still are!). He fitted a turn plate on the passenger seat so that swivels round and there is a spare turn-plate (worth about £200) for the drivers seat for a replacement job if that's something the next owner is inclined to do (I just never got round to it).

Mechanically, i've had it looked after the last couple of years by an old-school garage in Tottenham. Obviously being from 1985 it's had loads of work done over the years and there's a whole stack of service history and MOTs going all the way back. Most recently there was a new emergency cooling fan fitted next to the radiator and some welding work done to the front panel / bumper. It was fully serviced in January and is MOT'ed until January 2023. Bodywork-wise it could do with some attention, there's a rear right panel that likely needs beaten-out and repaired, or possibly replaced. Some of the seams could do with some attention pretty soon. It would have been my next project had we not decided to sell.

We're selling for a few reasons. Our kids have outgrown it to some extent, we're not getting away in it as much as we used to and when we do go we generally need to be back home within 24 to 36 hours. This means its relatively slow speed on the motorway eats into our time too much. It's also now in the London ULEZ charging zone meaning each time it is moved it costs us money. (It will become a classic vehicle in 2025 its worth noting).

Right i've rambled on enough. I don't really know how to price this so using prices from similar vehicles on here and other sites, at 9.5k, but i'm willing to discuss the price.

As with all online marketplaces you should take care when considering a vehicle purchase. We advise you physically inspect any vehicle in person before parting with any money. If it sounds too good to be true then it probably is. The JK Marketplace is a free feature on our web-site. If you have reason to believe that one of the adverts placed here is a scam then please let us know. NEVER SEND MONEY TO AN ESCROW ACCOUNT, THIS IS A SCAM.

Find out what to check before you buy a VW T25

Read all about the history of the VW T25

Look at some of the original VW T25 brochures