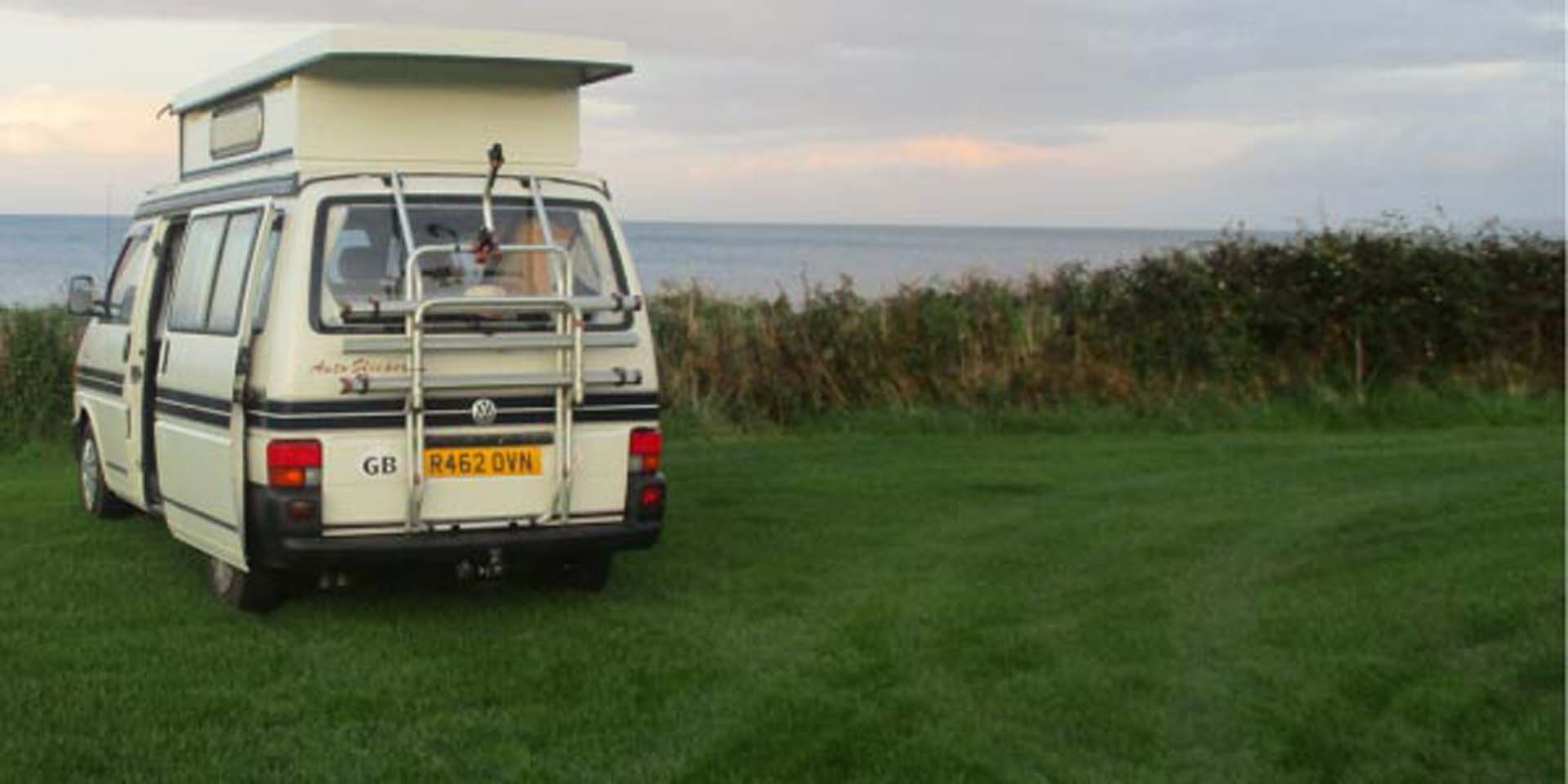 Peggy, she came to me with that name. Her first owner lived near Inverness, then she’s lived in Cornwall and Yorkshire.

June 2019. I saw her advertised in JK marketplace, she was living in Yorkshire.

Not a lot, the main jobs were the cross-members mentioned in the story.

My hobby is motorsport, I’m too old to compete now so I only spectate. I plan to visit events throughout Europe, particularly the WEC and WGT series.

Nothing yet, Peggy came with most things I need.

Yes, although my Mum and Dad had a T2 for a long time

Mum and Dad had one that they loved and I need good service backup in Europe.

Just me and my granddaughters.

Anywhere of interest. I’ve been to Pembrey (Anglesey), Silverstone, Devon.

Not yet, I’ve not had her long enough, just a few trips in the UK. No doubt I’ll have a lot more to relate later in the year.

We did a lot of caravanning with the children, mainly to southern France. When the children flew the nest we bought a 2 berth caravan which, although only 3 years old was a disaster, so after 3 weeks in France living with bits that fell off or didn’t work we sold it.

I always thought I’d like a camper van to get to places quicker than towing a caravan and cheaper on the ferries, but Chris (Mrs H) wasn’t keen so we had a few years holidaying in hotels. Sadly, the love of my life died from cancer early in 2017 and about a year ago I started to think about a camper and, egged on by the children, aimed for a T1 because I love old vehicles, having renovated and run cars from the 1920s  and sentimental memories of when we were students and we did a tour of Europe in a rented T1. I had set a budget of £15000 that was hopelessly optimistic, so I changed my sights to a T2. I looked at so many that I was losing track of those that were in good order and to the spec. that I wanted, so I designed a spreadsheet and I got some funny looks after viewings when I spent a few minutes filling in the sheet.

After looking at 17 T2s and travelling a thousand miles or so I gave up and concluded I’d have to spend more than the budget to get a good one that had all the welding done and was in good enough shape to travel all over Europe. I eventually came around to the idea that a good T4 could be acquired within budget, not such a collector’s item as a T1 or a T2, and not old enough to be classed as lovable, but probably more to my needs.

My experience is that rust and corrosion are the most difficult faults to deal with on any old vehicle, I’m quite happy to rebuild an engine or any mechanical item, but corrosion is always difficult, time-consuming and often expensive to put right. So, having researched and identified the T4 areas subject to corrosion, once again I started searching for a good example. I’ve always preferred vehicles with big engines, but unfortunately, T4s with 2.4 engines seem strangely rarer than T2s with 2.0s, anyway, I looked at three before I found Peggy on JK Marketplace. She was living with a family in Yorkshire and I went to meet her. I was pleased to find the inside in excellent order with everything in working order, including the central heating. I spent about an hour crawling underneath and she seemed solid apart from the usual areas, i.e. the radiator support cross-member and the rear bumper cross member. I knew that those are bolt-on items and I wasn’t too bothered, so after a short road test and a bit of haggling, I did a deal, paid online and drove Peggy home the next day. I was well impressed, she was so quiet, cruising at 70 on light throttle. The 80 or so miles slipped away, and I fell in love with Peggy.

Next day I went to my local traditional village garage to greetings of “What have you bought this time”? They’re used to my turning up with series Land Rovers or 1920s cars, so a 21year old was quite young. We put Peggy up on the ramp and checked her underneath where we found things very sound except for the two cross-members. I don’t have a ramp or pit at home, so I arranged for the boys to fit the cross-members if I sourced them. Finding the front one was easy, a new one was available and surprisingly cheap, so I ordered that and it arrived the next day. The rear one was more difficult; VW has stopped making them and the pattern manufacturers have not started yet. I eventually found a good second hand one, so I went for it. After thorough rustproofing, the items were fitted and after a major service, Peggy is now 100%. There was a fair bit of corrosion around the wing edges, so I’ve tidied that up to save time and it looks OK, but I’ll tackle the job properly with replacement panels and a professional respray. All in all, I’m very happy, I now have a lovely camper at a total cost of well under £10000. But my heart still misses a beat whenever I see a T1 or T2 on the road

I’ve done a few UK trips with sleepovers and Peggy’s everything I could wish for, I’m now looking forward to a long European trip, later.