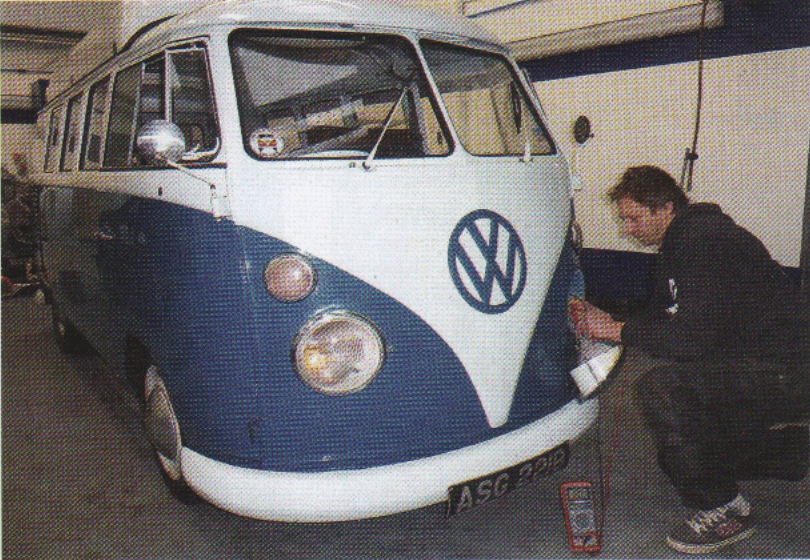 Just Kampers Written By Matt Keene
More from this author

VW electrical systems are, by and large, pretty robust. They were made to a high standard and all components used were built to last, so it’s not uncommon to see 1950’s VWs still running quite happily on completely original electrics, right down to the 6V charging system – proof, if it were needed, that VW got it right in the first place.

Now, whilst VW may have sown the seeds for a dependable electrical system designed to last many decades, what they didn’t count on was the general public and its propensity for messing about with things.  People love to add extra electrical gizmos to their cars, such as radios, spotlights and the like, but rarely consider the future implications of splicing things into a wiring loom using horrid Scotch Locks, Chock Blocks and other weird sounding paraphernalia.

Another issue seems to be so-called restorers – both amateur and professional.  Many a time I have seen the aftermath of a professional restorer’s attempt at tidying up the wiring after they have butchered the loom with their angle grinders and covered it in various shades of paint.  Yes, even the pros are guilty of this sacrilege, and the old adage of ‘out of sight, out of mind’ has never been more apt than when dealing with wiring bodges stuffed under the carpet.  The problem comes when a fault arises and somebody else needs to trace the problem …

Let’s face it, unless you are very lucky to own a one-owner Volkswagen with full service history that has never been messed with, the chances are your pride and joy has, in its lifetime, had several enthusiastic owners and ham-fisted pros tinkering with it over the years.   Now don’t get me wrong – not everybody has sausage fingers but, as old Volkswagens – particularly Buses – were once cheap transport, they were often kept on the road on a shoestring.

Where am I going with all this? The answer is simple: 90% of electrical faults can be traced to poor workmanship.  For example: one of your headlamps stops functioning. Logic would suggest the bulb has failed. Yet, in my experience, 9 times out of 10 you spend hours tracing fault after fault, only to find yourself getting deeper into the bowls of your car’s wiring system, only to find a carelessly re-attached earth connection is at fault.  Here we aim to show you several useful tips in dealing with just such common issues on old VW’s. 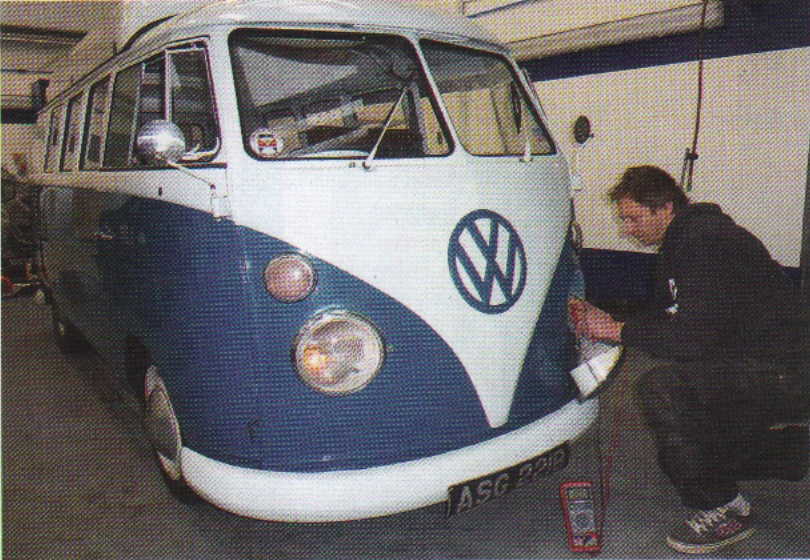 1)      A problem with the lighting Is what usually kicks off your trip into your VW’s wiring system. One minute the headlamp works, the next it doesn’t. Er, hold on, it’s working again! Sounds familiar? 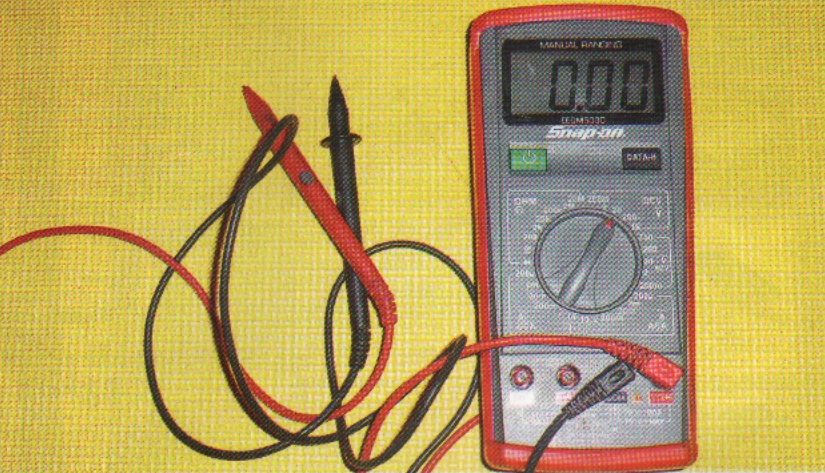 2)      The multimeter: now don’t go thinking you’ll have to break the bank to buy an expensive one like the one on show here – my first multimeter cost £5 and it still works to this day! The main functions we’ll concern ourselves with are the 0-20V function, which basically measures the voltage output of the wires tested, and the Continuity function, which tests for any breakages that might disrupt current flow. 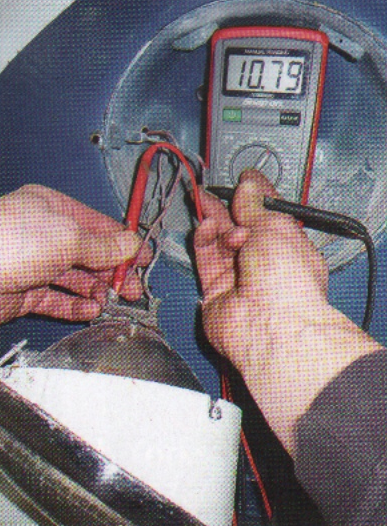 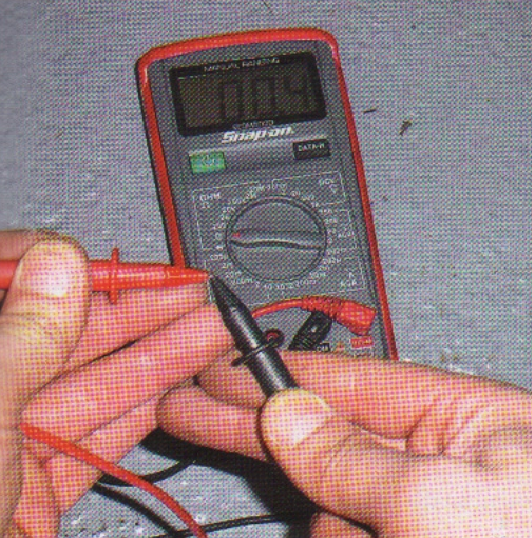 4)      Testing for continuity. There will be a Continuity function on pretty much all multimeters, which is useful for testing breaks in wires that are invisible to the eye i.e. where the copper underneath the plastic shield has broken down. 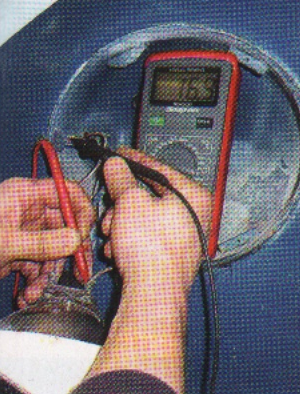 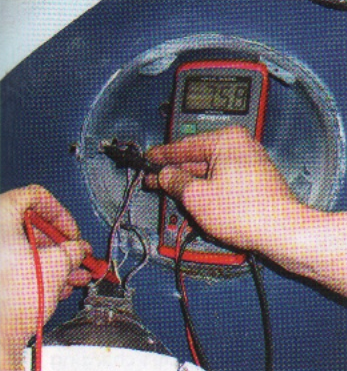 6)      Often, the headlamp dip and main beam bulbs share a common earth with the sidelights.  If a main or dip beam bulb isn’t functioning, check the voltage at the live feeds to the dip and the main circuits. Again, red probe from the multimeter (switched back to 0-20V) to the live feed at the bulb, black probe from the multimeter to a good earth on the vehicle’s body.  Poor voltage, as shown here, is a sign of dodgy wiring connections. 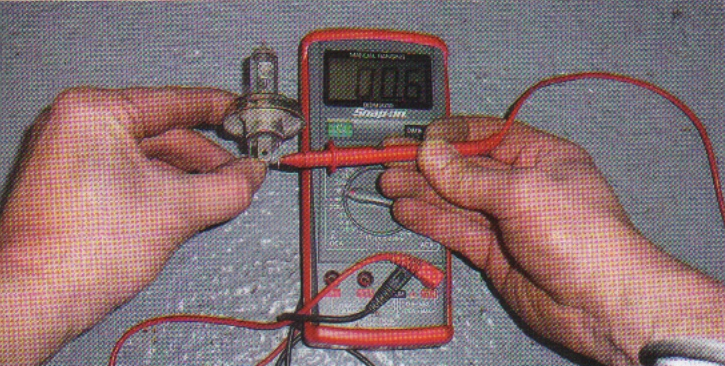 7)      To test a bulb to see whether it is functional, switch the multimeter to continuity check mode and hold the black probe onto the earth pole on the bulb and the red probe to either the main or dip pole on the bulb.  A beeping (assuming your machine does beep) denotes continuity and a bulb in working order.

8)      Once you have traced and rectified a fault, re-connect the bulb and test both dip and main circuits again. The result should be a brightly working bulb. 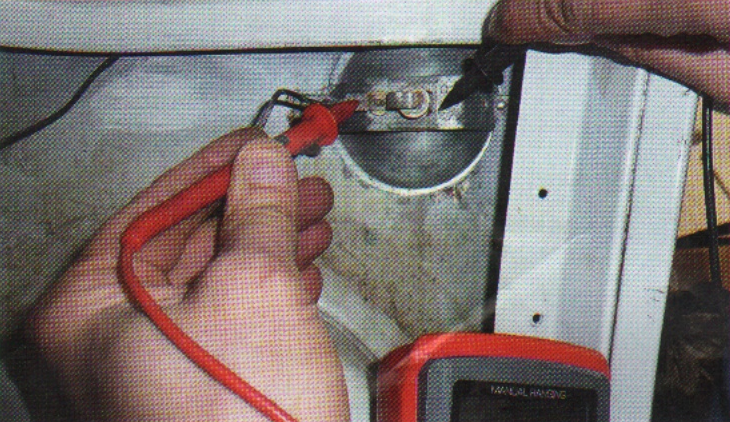 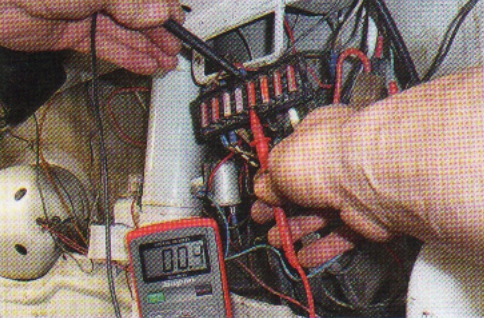 10)      Testing fuses without removing them from the vehicle is simple; switch the multimeter to Continuity mode and probe either side of the fuse.  Again, an audible beep will denote a sound fuse. 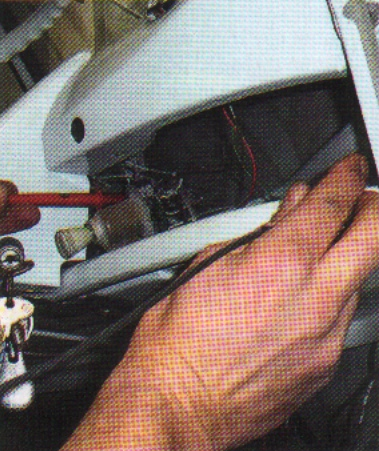 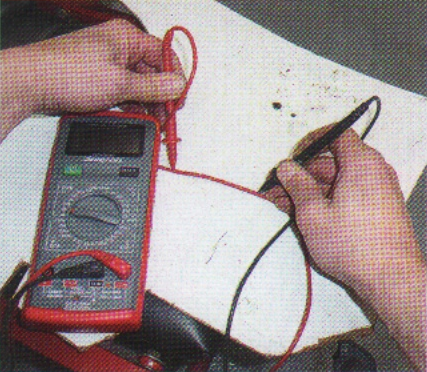 12)      Checking a wire for continuity.  This is useful for detecting invisible breaks in the copper wire strands.  Simply switch the multimeter to Continuity mode and press the spikes from the probes through the plastic sheathing to penetrate the copper strands beneath.  A beep and the wire is good. 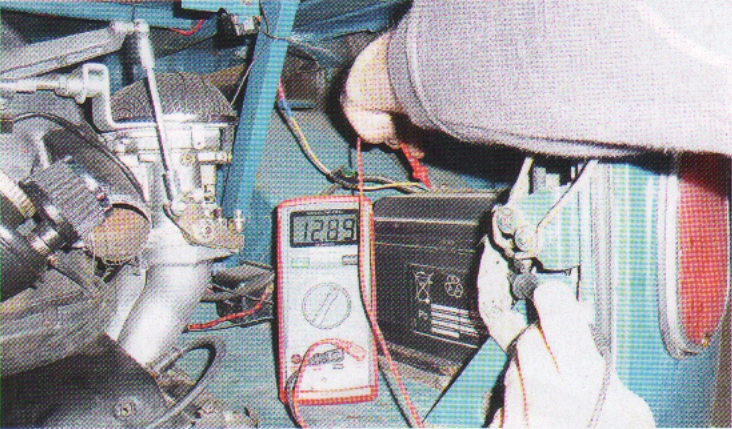 13)      Checking a battery for good cell condition: place the red probe on the positive terminal and the black probe onto the negative terminal. 12.89V looks good at the moment… 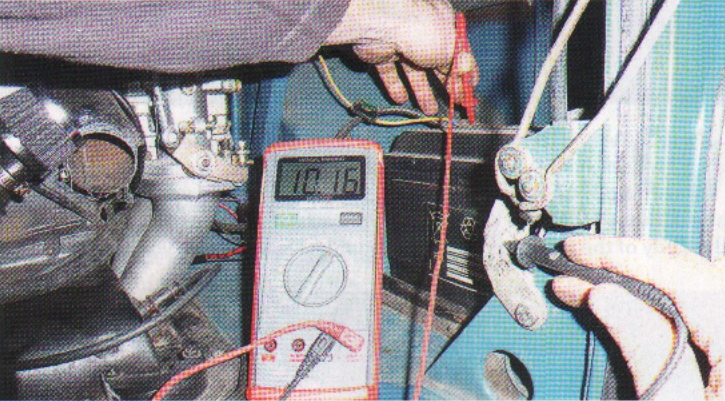 14)   but switch on the lights and look what happens.  The indicated voltage of 10.16V suggests a cell has failed, or is in the process of failing.  A good battery should drop no more than 0.5V with the lights momentarily switched on. 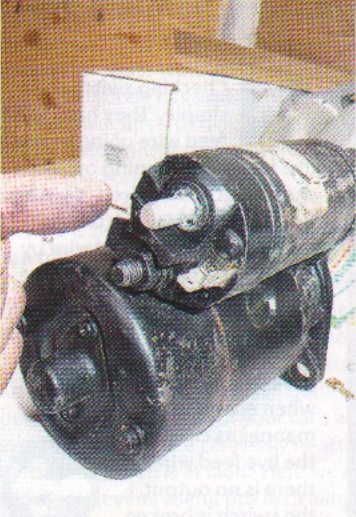 15)      After lighting, starting problems are the next most common fault, and again, can often be attributed to poor electrical connections. The 8mm threaded pole on the starter motor is the main feed from the battery.  Check the voltage at this point with the red probe on this pole and the black probe to a good chassis earth.  A reading of below 12V indicates poor connections/ wiring.  Visually check and clean all connections.  The spade terminal adjacent to the 8mm pole is the trigger wire to solenoid from the ignition key.  Check its voltage when the ignition key is turned to start position.  You may need an extra pair of hands here.&nbs;

16)      Further starting issues can be attributed to a break in the live feed wire to the ignition coil.  With the multimeter switched to 0-20V, check the live feed using the red probe, while touching the black probe to a good earth on the vehicle. Note: the coil is marked + and -, + being the live. 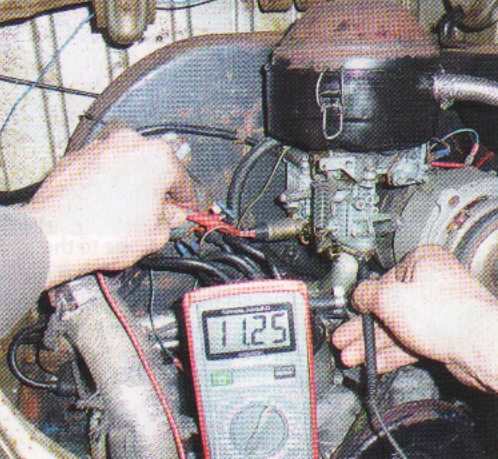 17)      Another potential starting issue is the fuel cut-off solenoid. Switch the ignition on and check there is a live feed to the solenoid using the red probe (with the multimeter in the 0-20V mode) onto the solenoid feed wire, and the black probe held to earth. 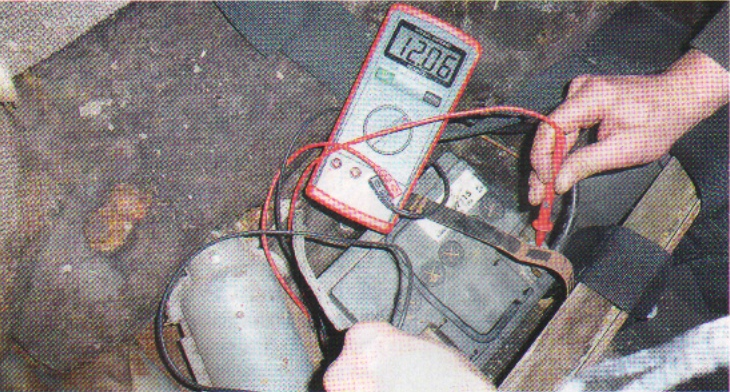 18)      The multimeter is also useful for testing the vehicle’s charging system.  Attach the red probe (multimeter in 0-20V mode) to the positive (+) pole on the battery and the black to the negative (-).  A good battery should read at least 12.5V with the engine switched off. 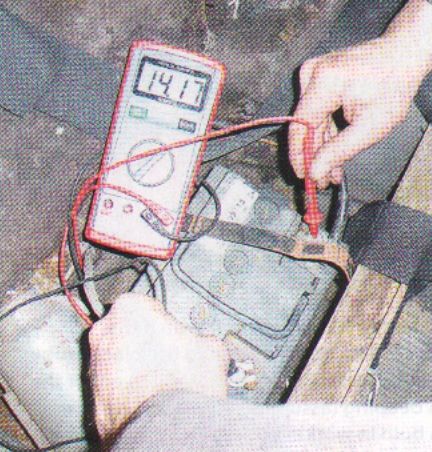 19)      Now start the engine and attach the red probe (multimeter in 0-20V mode) to the positive (+) pole of the battery and the black to the negative (-) pole.  On a vehicle equipped with an alternator, the voltage should read over 14V at idle.  On a vehicle equipped with a dynamo, rev the engine to approximately 2,000 rpm and the reading indicated should be in the region of 13.5V-14V.