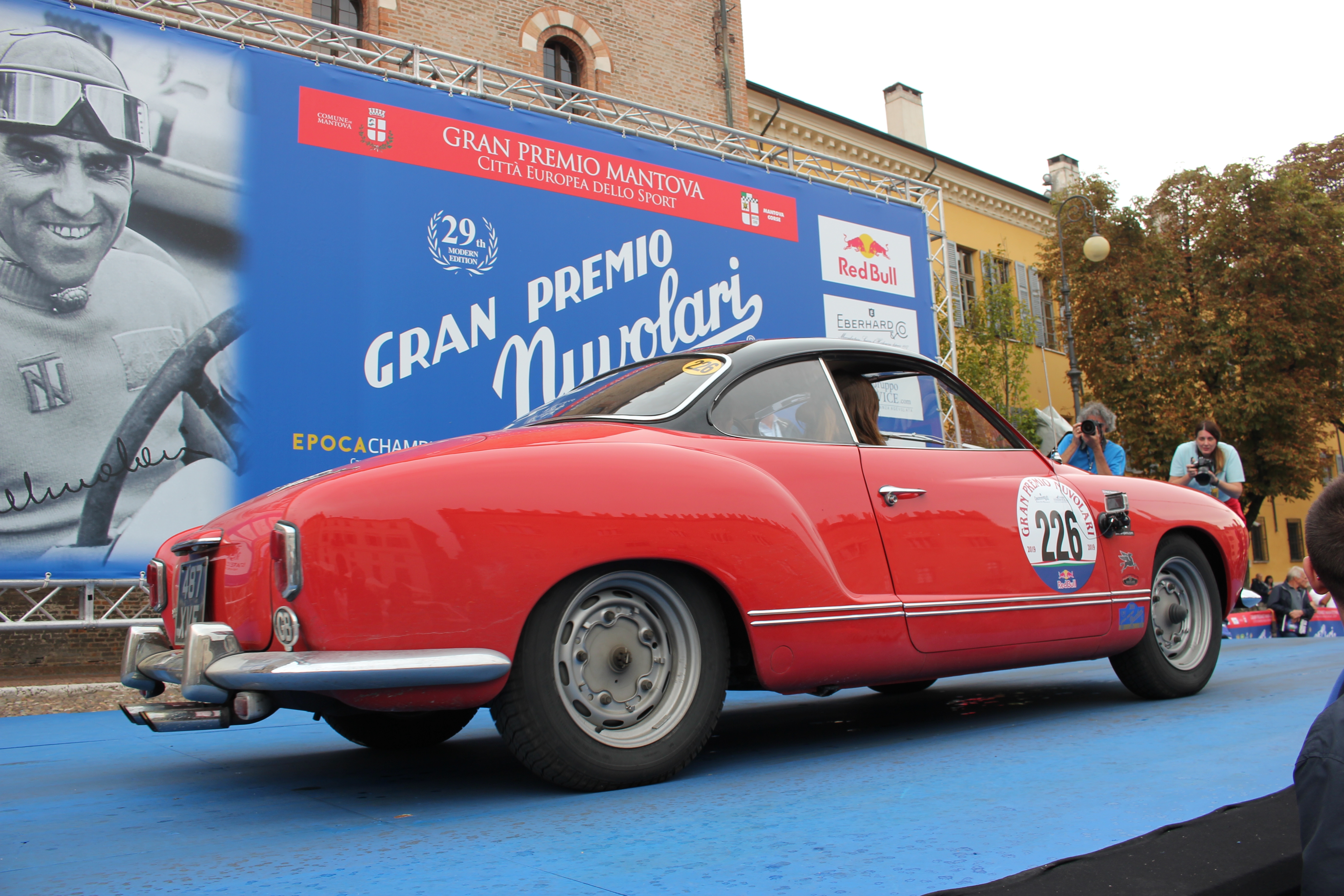 An early start was made on a damp and grey Wednesday morning, as the JK T6, pulled the car and trailer on the 942-mile pilgrimage. Having covered 670 miles in a day, the most random event, after pulling up at 10.30 at night in a small village in Switzerland, choosing the first hotel en route, Pete and I were immediately given a very warm welcome. After taking the only van and trailer sized parking space, another crew on way to the event pulled up, who had pre-booked the hotel and parking space. It was the start of bad luck for their team, their original car had broken down before they set off, then their borrowed Jag broke down on day 2 and they finished the event in a rental car. By lunchtime on Thursday the duo arrived safely in Montova, in Northern Italy. 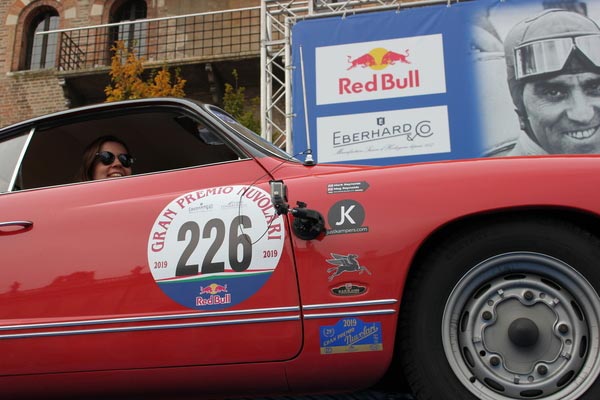 My daughter Meg had volunteered to be navigator on the event and my wife Kerry came along to offer moral support. So, Meg and I queued up in a line that looked like it would never move, suddenly it started reducing at a reasonable speed, once it was our turn we discovered a series of tables and at each one we had to show different documents or were issued things like the car and support van stickers. This was followed by the inevitably nerve racking job of putting on the door stickers. Making sure they were straight and neat! On the Mille Miglia scrutineering was quite thorough, this was positively ‘slap dash’. Horn work? light work? OK you’re in… 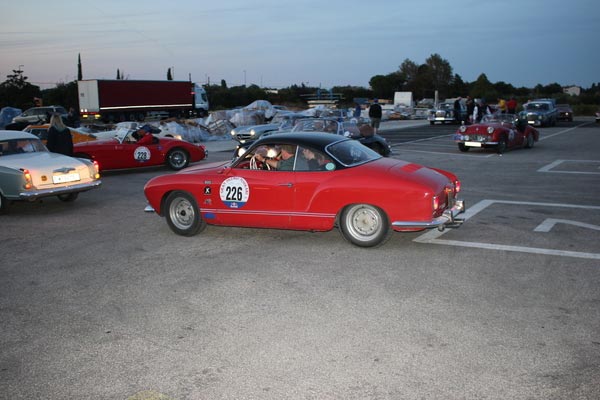 Friday morning saw all the cars assemble in a typically beautiful Italian city square, in the centre of Mantova. What looked like chaos, trying to get cars into the right numerical order to start the event on the ramp podium, somehow became a smooth and convivial event as drivers allowed other cars to slither in front, to be in the right numerical order. That was the last time anyone voluntarily allowed some one ahead of them! On day one the event went north to Lake Garda and then up into the hills before winding back south to Bologna, where there was an overnight stay. 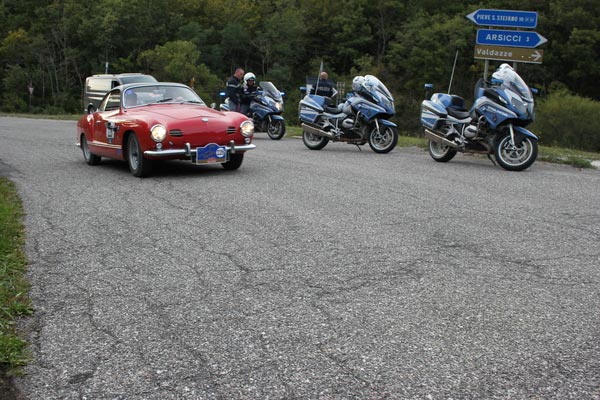 This was the start of the regularities. The regularities appear to be a way of race / rally organizers getting the ‘blessing’ of the Police to tear around like hooligans on the public road!  But 90 regularities in 2 and a half days…really! At least they slowed the cars down so they could appreciate the amazing scenery. 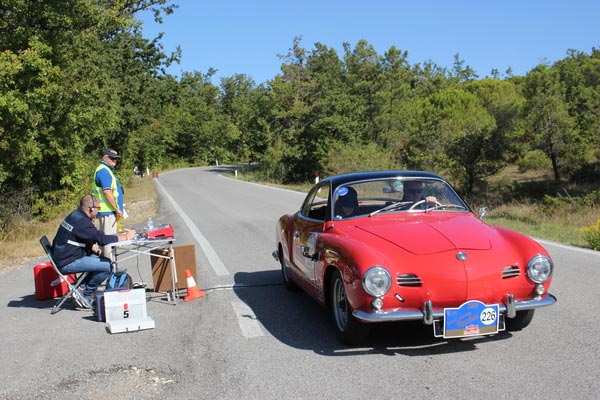 An early breakfast was followed by an 8am start from Bologna to Siena and Arezzo, before heading north-east to the coast at Rimini. The weather was mid-twenties and sunny, perfect driving weather. Saturday was scattered with yet more regularities! The problem was, by 11am, the speedo seized, with a squeal and the Brantz rally meter stopped working. So, no speedo, no way of measuring distance, just a rev counter! IPhone to the rescue, an app was found, that had been downloaded for the Mille Miglia, but never used. So, discovering that 2,600 RPM in 3rd is 38km and most sections of time trials were at 38 or 40 kph, a mad plan was hatched! 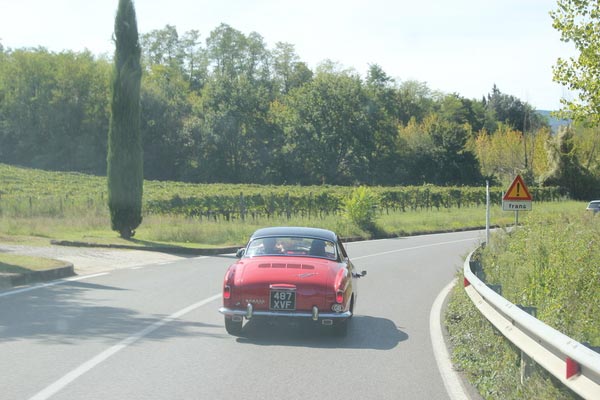 The broken speedo was soon forgotten and the opportunity to drive some of the most beautiful roads in Tuscany, certainly made up for it. Along the way in the towns and villages, the locals came out to wave and cheer the teams along. In many towns, where you had to stop to have your timesheet stamped, the locals handed out gifts. Wine, not an obvious choice when driving! The 1kg of uncooked risotto rice was truly random! Anyway, the thought was very kind. In Siena, the cars all went through the main town square, where a crowd had come out to welcome them. And in Rimini, the main square by the sea was given over to all the cars, which were parked up there for the night. 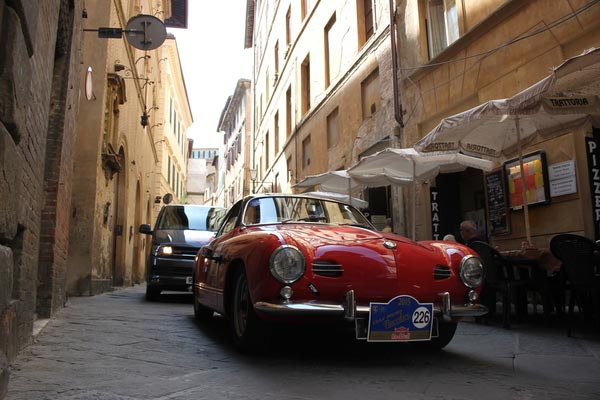 Where had the sun gone? Sunday started with drizzle, that turned to full on rain and ended in sunshine! The route north back to Mantova, was, you guessed it, filled with yet more regularities and still only Marks plan of doing them in 3rd at 2600 rpm to help them out. By 11am the weather was horrendous. There was an overtaking incident in the rain, that nearly turned this into an obituary! Too close to call, so the duo slowed down and squinted through the windscreen, wishing they’d packed some RainX! By the time the Ghia got to Ferrara, the rain had stopped and the sun was drying up the roads and suddenly all was well again. A bit of speed was needed to make up time, but the accelerator kept sticking on full throttle. (Back in the UK, Pete noticed the HT lead had somehow rolled behind the accelerator linkage, once moved to its correct place the problem was fixed, but too late for this event!). The two finished, all things considered a respectable 196th out of 320 cars. Not too bad especially when you see some of the cars they beat. 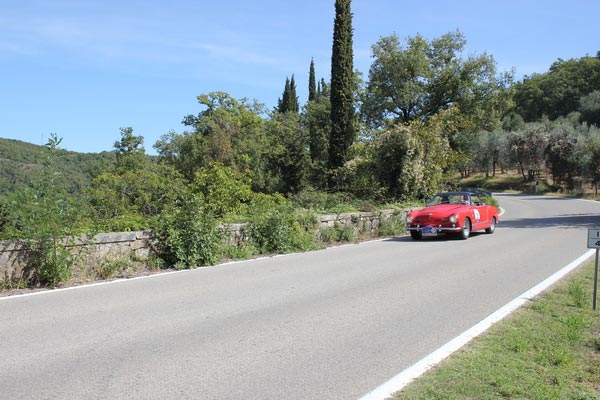 With Meg and Kerry flying back, Pete and I loaded the Ghia back on the trailer and on Sunday, late in the afternoon, headed north. After 5 hours, we found a hotel and the next day did the final 550 miles back to the UK.

Facts and figures of the event: 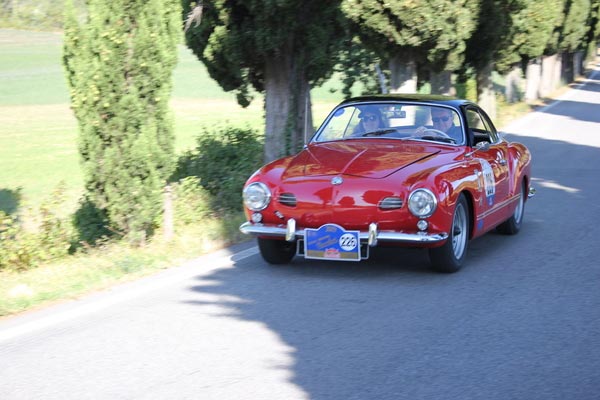 “ Dad’s always been like a VW version of a mad professor. Completely and utterly obsessed. So VW’s have always been a huge part of our family life.

Having watched my brother head off on an adventure- and return in one piece! I decided it was time for a father/daughter road trip.

I’ll be honest and say that I didn’t really know what to expect. Dad has always been a ‘keen’ driver - he’s also very competitive!

Being navigator was an experience! We whizzed through some beautiful scenery and met loads of great people (who obviously loved their cars as much as we do!).

At the end of it I think we probably both have a few grey hairs – although mine would be easier to discern than dad’s!

We definitely made some great memories. Ones I’ll treasure and yes, if he asked, I’d go again - but next time; I’m driving!”