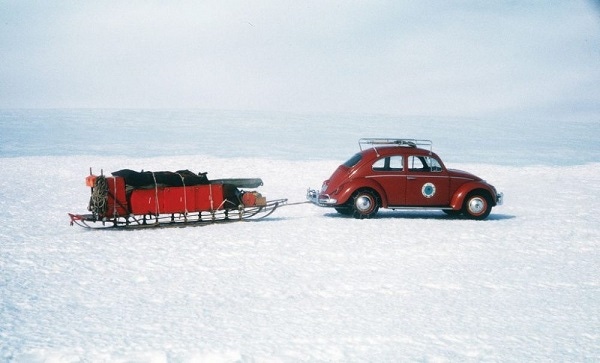 The Beetle that Conquered Antarctica

The Beetle that Conquered Antarctica

The story of Antarctica 1 ('The Red Terror' as it was to be later christened) begins with a chap called Ray McMahon. In November 1962, Ray was the ingoing 1963 expedition leader for the ANARE (Australian National Antarctic Research Expedition) team, due to start their yearlong rotation, at the Mawson base. 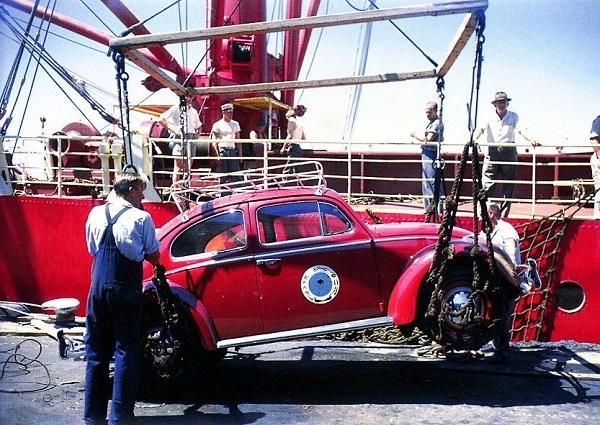 Ray struck upon an idea for transportation on reading that there were already two water-cooled vehicles functioning at the Mawson base. It struck him that if a Ferguson tractor and a Bedford truck could cope then an air-cooled engine would surely fair even better.

Taking the initiative, he contacted, what given his location in Melbourne, Australia, may not have been the most obvious choice, the marketing office of Volkswagen Australasia in Clayton.

It just so happened that, in somewhat of a perfect storm scenario, Volkswagenwerk HQ had recently instructed its representatives worldwide to concentrate on pushing the winter abilities of the beetle in Arctic conditions – this had (somewhat bizarrely) extended to branches in Australia! 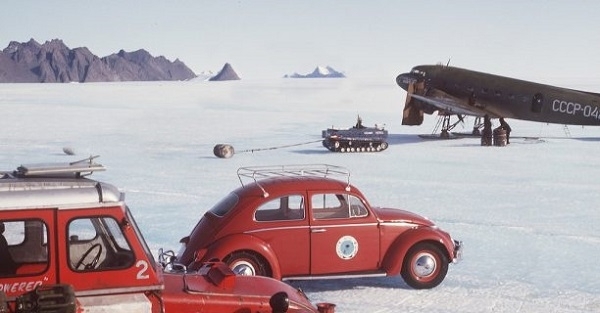 Taking the call that day was a young, new marketing exec called Graham. Who rather saw the potential in the request, made by Ray, that they lend a beetle for their yearlong expedition – for free of course!

Sensing a marketing opportunity (and perhaps on realising his luck) he took the request further up the food chain – where it was enthusiastically supported.

Ray had just bagged himself a beetle for the expedition – and Graham certainly earned himself some marketing brownie points!

A 1962 ½ Australian made beetle was selected at random from a batch made in December. The colour, ruby red, was chosen to be easily seen in the snowscape to which it was destined.

The notion of winterising a car was somewhat alien in the Australian heat. However, the Clayton Workshop began the process of readying the little car for its Antarctic Adventure.

The car was delivered with a thorough box of spares which also included wheels, and, even (in a further touch of marketing mastery) a Bolex cine cam and film. 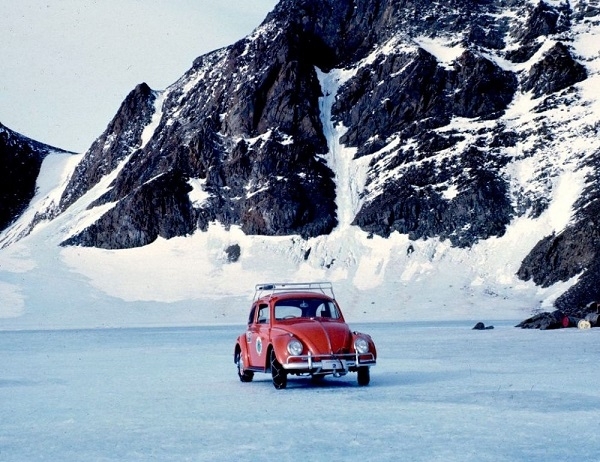 Finished with painted ANARE livery and new number plates branded with ANTARCTICA 1 the car was ready to be collected by an ever so grateful Ray. The total cost of the car, prepping and associated spares – ZERO!

The little car left Port Melbourne aboard the supply ship 'Nella Dan'  – itself an impressive mode of transport with a varied and fascinating history . From there it made the 6100km journey south to be unloaded at Mawson, with the rest of the annual supply run, arriving in January 1963.

The tank was filled with BP winter grade petrol and then underwent some trial runs. Some at the base doubted the little cars abilities and bets were placed as to how it would cope.

Testing it initially on a 35 km round trip to the airstrip on the ice plateau. Considering the steep snow incline behind the Mawson base, that is a principle part of this journey, many betting against (including the captain of the Nella Dan) believed their money already easily won – Ray and the beetle had other ideas! The beetle made it round in near on record time and managed the slope under its own power!

Geoff Merrill the official photographer shot 500 feet of movie film and captured several images which then travelled back on the Nella Dan and caused quite a sensation. The VW marketing genius stepped in and many of these shots went on to inform iconic VW ad’s that many of us recognise today.

The seed of belief sown in the little car’s abilities it went on to prove its worth time and time again.

The beetle was to spend its full year at the Mawson base undertaking all sorts of functions in the harshest conditions.

For the scientists it served, as many of us can identify with, it became more than the sum of its parts. Growing in their affections for its plucky doggedness it soon earned the nickname The Red Terror.

Having an air-cooled engine at its heart meant that it never froze and with the benefit of being tightly sealed it never succumbed to the persistent powdery snow that found its way so easily everywhere else. 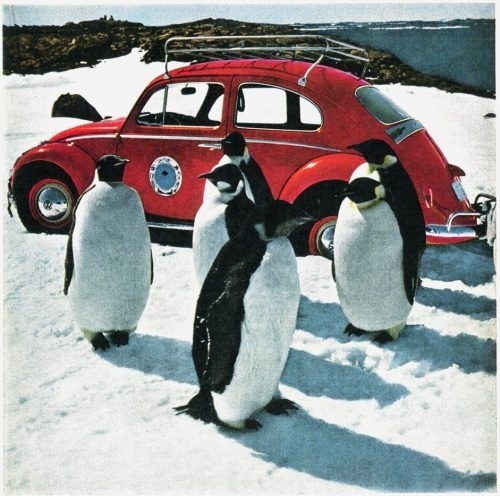 There are several glowing reports of its abilities in exceptionally harsh conditions, detailing winds of up to 100MPH which more than once tore the doors away from scientists grasp and forced them inside out to fold flat against the front hub caps. The hinges taking the brunt and subsequently being easily straightened out by the Mawson mechanics!

Due to the obvious communication difficulties, both in terms of technology and location, Ray would send a monthly Morse code transmission, via long wave radio, to detail Antarctica 1’s progress.

One such message noted:

“ON THIS TRIP, ICE SLOPES, SNOW FIELDS, AND CREVASSED HILLS WERE ENCOUNTERED BUT NO WORRY TO THE ‘RED TERROR’. THE FINAL APPROACH TO FISCHER IS A VERY STEEP SLOPE WHICH WAS TOUGH GOING DUE TO SINKING INTO THE SNOW, BUT VW MADE IT TO THE TOP”

Antarctica 1…How Did It Go Down There?

No doubt you’ve read and heard a lot about the Volkswagen that was taken down to Mawson in 1963; well, here is a first-hand account on what it did during its tour of duty in Antarctica. First of all, it didn’t take the place of any tracked vehicles, but it certainly filled the gap between walking and driving the Snowtrac. The furthest distance the VW travelled in any one direction was about 20 kilometres, but over the twelve months it covered a total of about 2100 km.

To start with, there were a few bets made that the car wouldn’t negotiate the ice slope behind the station, but this was quickly disproved when the car, fitted with chains to the rear wheels, made the distance to GWAM without any worry. With this minor horror stretch conquered, it was then taken through to the mountain across the slotted ice and snowfields. A wheeled vehicle driven across this sort of terrain can get into a lot of strife, but it was found that with a bit of speed under its belt, these dangers were eliminated (sometimes). The VW now holds the unofficial record for the best time from Rumdoodle to Mawson, a time of 50 minutes for the 20 km run, and MAN! That suspension sure was working overtime! Now maybe that’s how the frame-head stress came about?

In the early part of the year, the VW was put into active service in towing a loaded dog sledge up to Rumdoodle to assist a field party in saving them the worry of driving and hauling the dogs up the icy slope. It made a run up to Fischer Nunatak, and surprised everyone when it made the steep snow under its own steam. Whenever a Russian transport aircraft visited the station, the VW put up its TAXI sign and scooted up to the airfield to assist in transporting the visitors back to the station. At times it was quite fortunate that it had 3 or 4 heavy Russkies for passengers, as not all the snowfields could be avoided. And when it did sink down to its belly plate in the soft snow, it was an easy matter to lift the car clear of the bog up onto more solid snow. 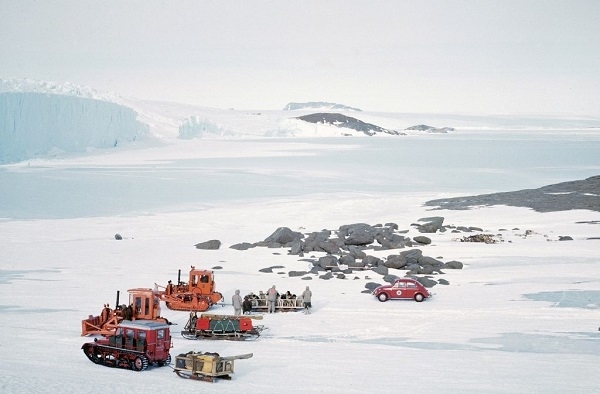 When the sea ice formed, the VW was used for many forms of recreation, from a pleasant Sunday afternoon drive around the islands, to being used in towing ardent skiers around the harbour at rather hair-raising speeds. Many’s the time, though, one could see the shovels being wielded when it was found the car didn’t quite make it through a snow drift.

Our devoted glaciologist found the VW very useful, especially when he wanted to run out to his hole in the ice off the West Arm, where he was carrying out regular studies on the growth of the sea ice, etc. The VW was used for other scientific work, such as checking the ice accumulation stake line between the station and the mountains, for driving from stake to stake proved much faster than in the tracked snow vehicles. But it certainly played havoc with the nerves of the passengers as the fearless driver slot-hopped around the ice domes.

Apart from a bit of electric welding needed in repairing a section of the front axle mount that had been severely weakened by the type of terrain it was subjected to, and the replacement of the front ‘shockers’ which had given up the ghost for the same reason, the VW gave very good service with a minimum of worry to the mechanical section who only had to service it and feed it petrol regularly. On the whole, the car gave the 1963 team at Mawson good service as ‘The Second Car’.

The only failing with the car, which given the harshest of conditions would seem entirely acceptable, was the chassis frame head. In the Antarctic conditions cracking could be induced in only a few hundred miles – luckily the Mawson mechanics were quick to diagnose and were always on hand to weld as required! The mechanics would note that beyond having to service and feed with petrol there was very little mechanical assistance required by the little red bug. 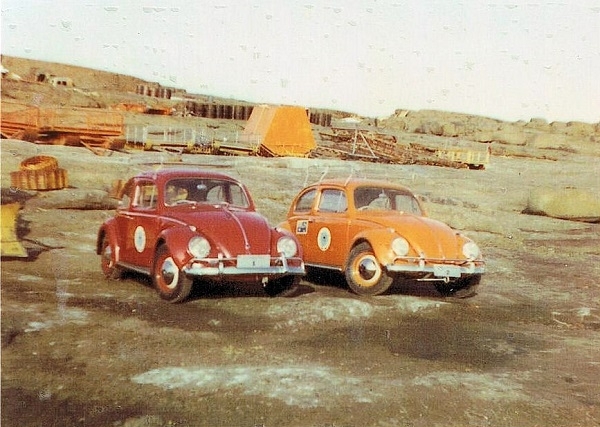 The year passed quickly and soon the 1963 expedition and Antarctica 1 along with them were due to leave. Prior to boarding the Nella Dan on the homeward journey, Antarctica 1, would briefly stand on the dock, next to the incoming Antarctica 2 – a bright orange VW beetle. 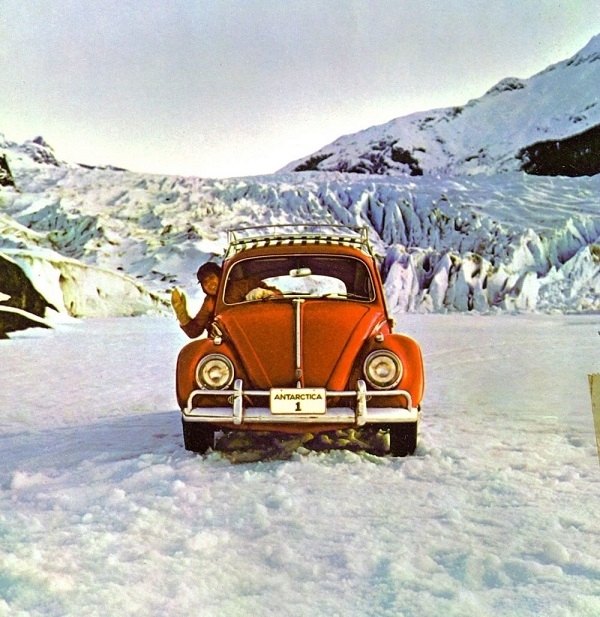 To continue the story of Antarctica 1, and the beetles that followed at the Mawson base you can read this excellent article written by Phil Matthews.