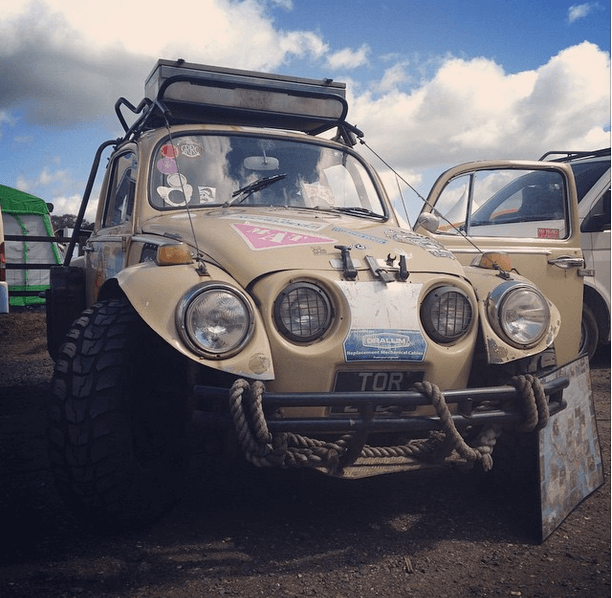 To date Fiona has taken part in 7 rallies and tours since 2007 – I think it’s safe to say she’s caught the bug.

In her own words; “the most strenuous tour was probably when I drove to Singapore” and at 22,000 miles it easy to understand why! Travelling across rugged terrain and through more than 15 countries it’s a challenge that many people would cower at but for Fiona it was something she had always wanted to do. 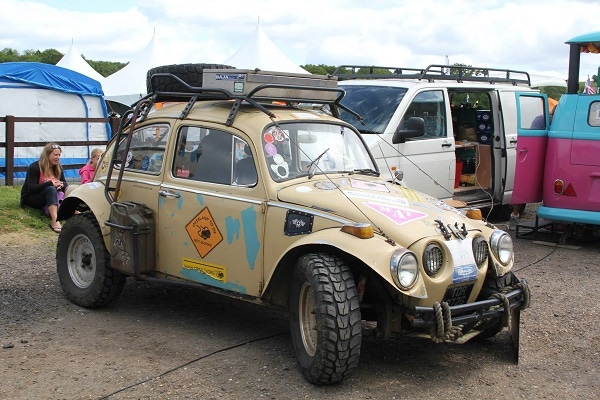 And Fiona’s vehicle of choice? A 40 year old baja beetle called ‘Pedro’. The lack of overhang on the bodywork meant all-terrain tyres could be fitted (see picture), a necessity when travelling across desert.  Now a 40 year old beetle may not have been the most reliable car to choose to travel 22,000 miles over 3 months, a fact that was proven when the starter motor packed up on day 1 – this side of the channel tunnel! After this there were only a few break downs on the whole journey, once in Pakistan when fording a river and the sump guard was bent backwards under the car, an oil leak and some minor problems with the points. Amazingly over the whole journey Pedro only suffered one puncture!

Throughout the tour Fiona was joined by her co-driver Rica. After assuring Fiona that she could drive a manual car it soon transpired that Rica couldn’t and Fiona had to drive the whole way. Not only this, but as Rica was American she wasn’t able to get a visa to travel through Iran and so Fiona had to drive through Turkey, Iran and Pakistan on her own.  Luckily many of the people that Fiona met just wanted to talk to her about the car and she says that Iran is one of the friendliest countries she has ever been to, contrary to the picture that is painted of it in the media.

Both Fiona and Rica fell in love with Pakistan, the people and the culture, but the next stop was calling and soon they were in India visiting its most famous landmark, the Taj Mahal. The people of India bathe in the river Ganges. Even though bodies are thrown in it and it is riddled with disease, the water is believed to be holy.

The journey into Kathmandu was an interesting one with Pedro leaving a trail of oil behind him! Luckily for them Nepal was a popular place for “hippies” to visit back in the 60’s so getting parts for Pedro was not a problem.  Of all the places to discover a secret VW scene, the Himalayas are one of the most surprising! The old VW campers and beetles that had been abandoned in the 60’s when pilgrimaging across Nepal was the height of fashion had been restored and Fiona and Rica were able to find a specialist who gave Pedro a full going over!

After working through a mountain of paperwork and paying an impressive amount of money to get into China, they were told that legally they could not continue without a guide – who of course charged an obscene amount of money. 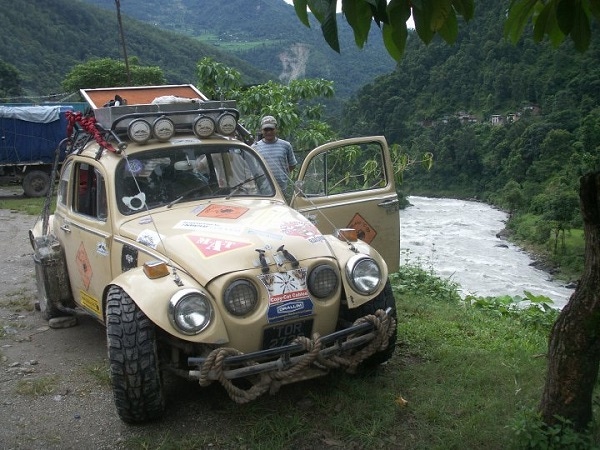 Trouble ensued in Lhasa when the tour guide refused to take them any further despite the fact that they had already paid him £1000, stating that Pedro was unsuitable to make the journey! In the end Pedro had to travel to the border in the back of truck whilst Fiona and Rica flew out to meet him.

The final leg of their journey led Fiona and Rica through Thailand and Malaysia, a whirlwind of wildlife parks and bad karaoke! Pedro’s milometer ticked round to 00000, he’d gone completely round the clock!!

After surviving an earthquake, they limped into Singapore with a severe oil leak and sadly the fault seemed terminal.  Pedro was shipped off back to England for some TLC (you’ll be pleased to know he recovered!) whilst Fiona travelled on to see friends and family in Australia.

All in all an incredible achievement for 2 women and their 40 year old baja beetle, Pedro.

To read more of Fiona’s incredible rally and tour stories go to her website www.worldrallies.com or visit her facebook page https://www.facebook.com/worldrallies.