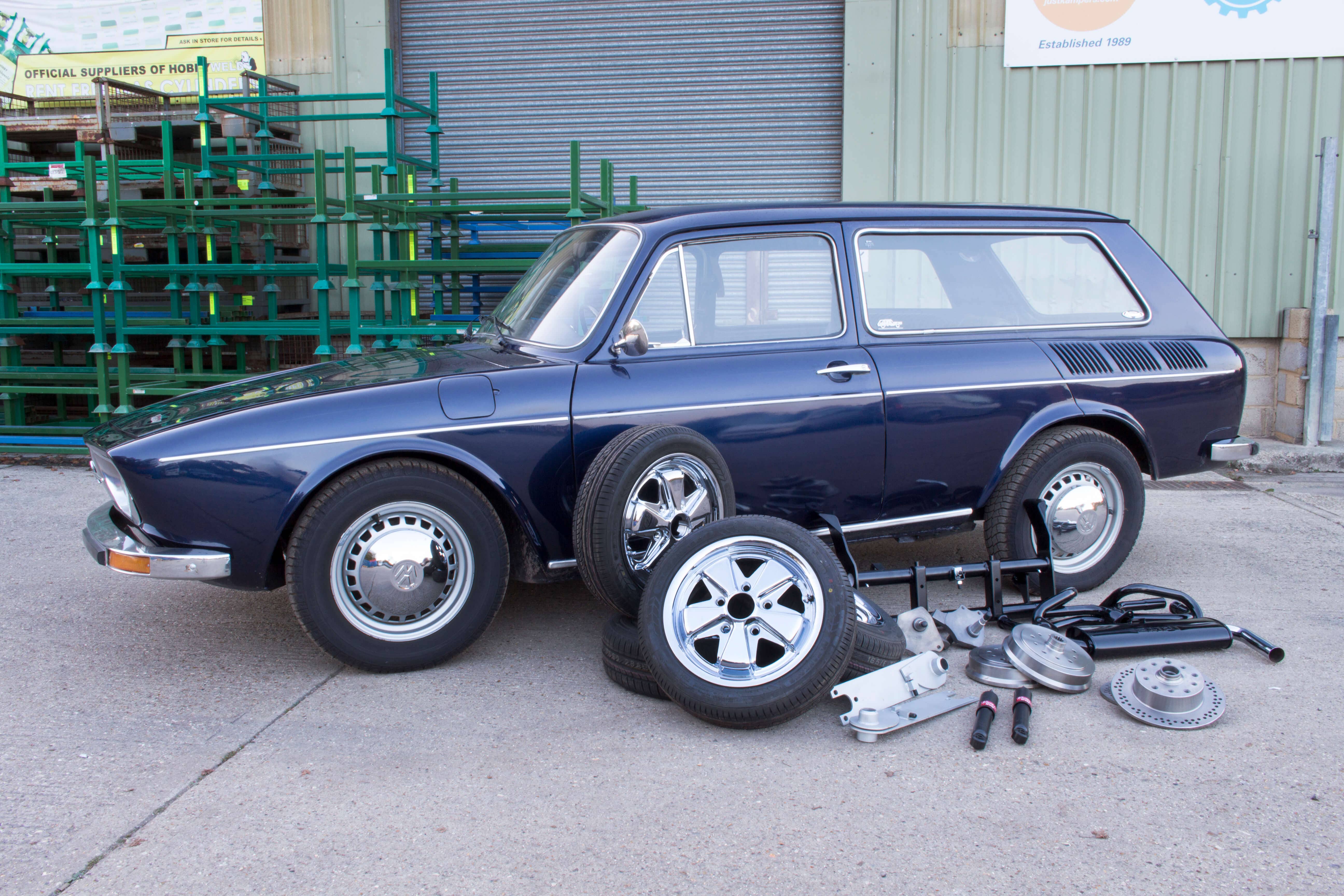 As many of you will know, MD of Just Kampers, Mark Reynolds, and his wife, Kerry, went to Brazil at the end of 2015 to visit suppliers and, whilst they were there, purchased some unique-to-Brazil Volkswagens.

One of the vehicles shipped back was this unusual Brazilian Type 3 Squareback, which made an appearance at The VolksWorld Show last year as part of JK’s Brazilian Volkswagen display, and was then used by John from Dynamat UK as a demonstrator for the company’s products at the JK Open Day.
Sadly, since then, it has been sat gathering dust, until the day Mark mentioned he had someone interested in buying it. A bit of quick talking and we managed to convince Mark it would be cool if, rather than selling it, we t one of our narrowed beams, drop it on the floor, add a set of wheels and use it as a staff pool car. Fortunately, he liked the sound of this and agreed, with the passing comment, “As long as you don’t mind doing all the work.” 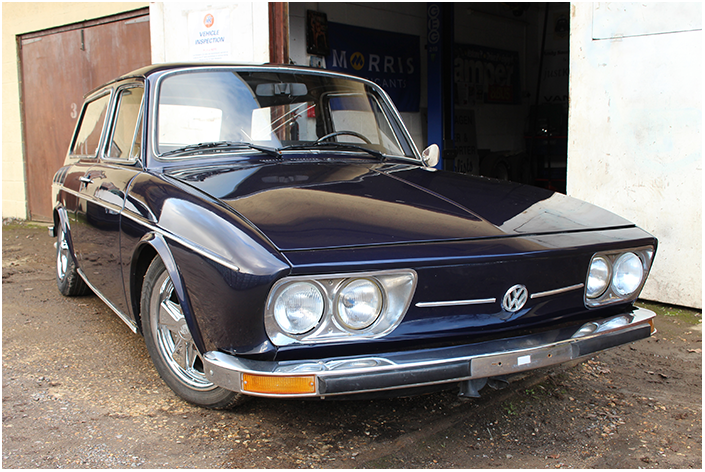 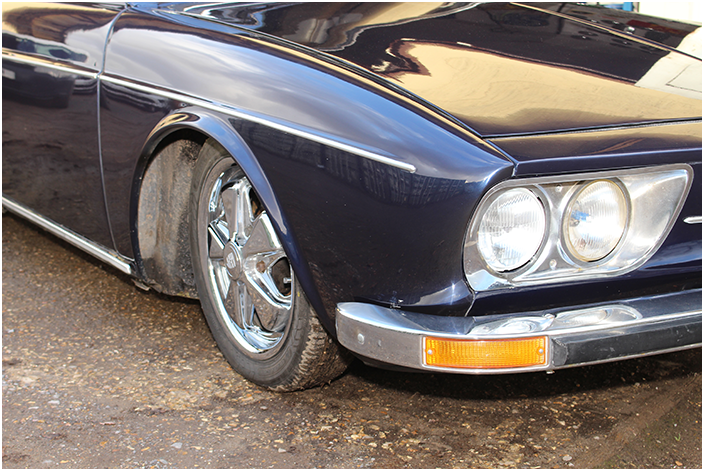 Jumping at the opportunity, Pete (Development Director) and Alex (Trade sales) rolled the car into the JK workshop that very day.

The Brazilian Type 3 is unusual in that its running gear owes more to the Beetle than the German-built Type 3. This caused a few minor problems later on, as you will find out.

Once on the ramp, after a quick measure up it was decided one of JK’s four-inch narrowed Beetle beams would fit, with a little tweaking of the inner wings. The first surprise came when the fuel tank was removed, and it was discovered that the original beam, although bolted to a Beetle-style frame head, also had a second pair of upper mounts. No problem, Alex simply removed these from the old beam and welded them onto the new one.

With this done, the beam was offered up, at which point it became obvious the ‘little tweak’ was going to be a bit more involved. After some head scratching, the decision was made to cut both front wheel tubs out and notch the inner wings for clearance. Just as the final piece was removed, Mark walked in to check on progress... Needless to say, he was a little shocked to find big chunks missing from the front of the car. 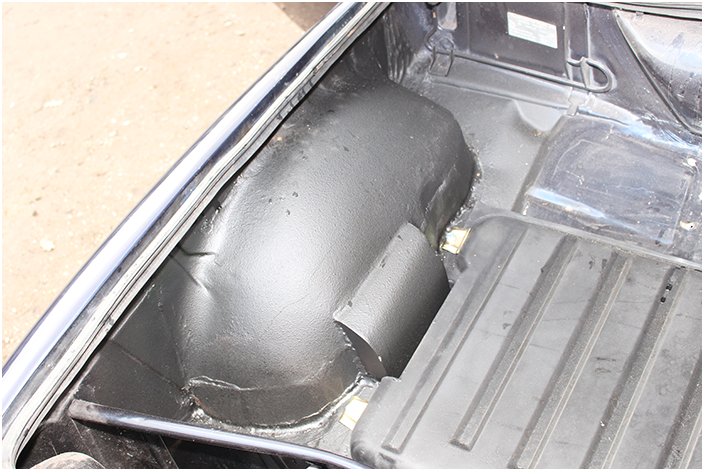 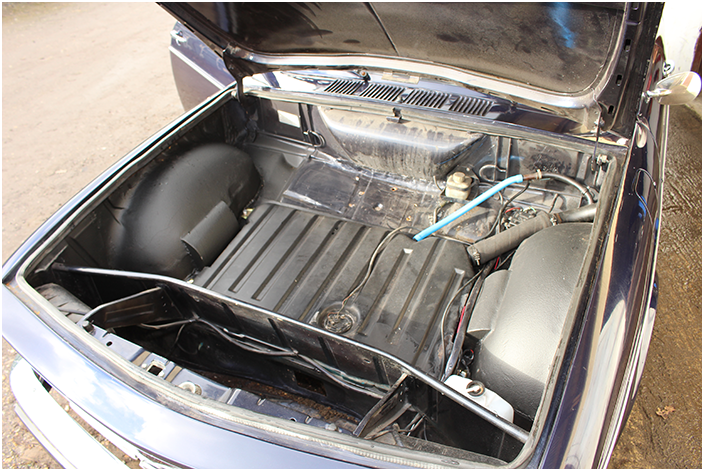 Alex then formed a couple of C-sections to let into the tank supports where the upper shock absorber mounts on the beam sit, while Pete narrowed and re- dimpled the original torsion leaves to suit the width of the new beam.

With everything now fitting, the new beam was bolted into place, with the addition of dropped spindles and Porsche pattern drilled brake discs with new bearings and seals. Stock length shock absorbers, with the upper bump stop rubber removed, and a set of JK narrowed track rods complete the front end package.

Now, however, the car had a lowered front with Porsche five-bolt hubs, while the rear was stock height with VW four-bolt hubs. No problem, a new pair of Porsche pattern Beetle brake drums and everything would be fine. Only it wasn’t that simple. 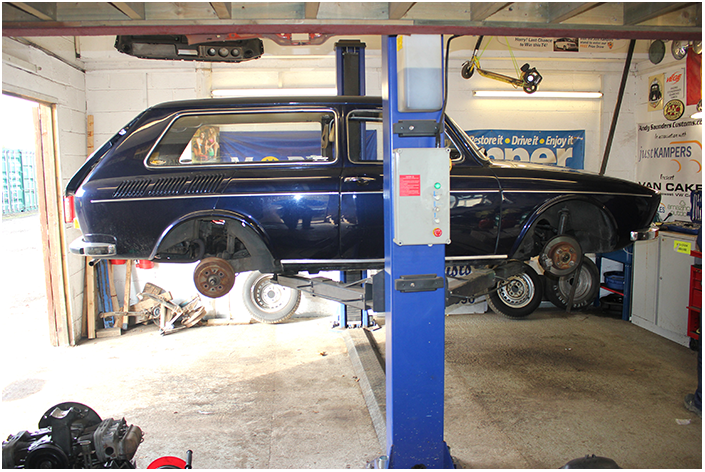 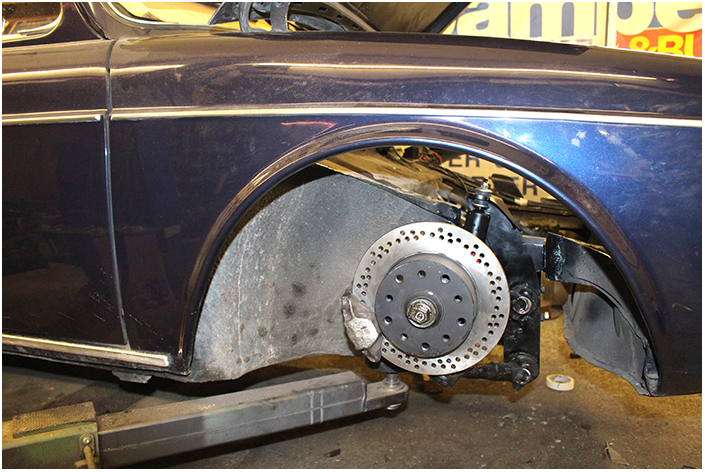 Again, the Brazilian production line caught us out. The rear brake drums on a Brazilian Type 3 are a two- piece design, similar to those on the back of a late Bay Window. The Beetle drums are slightly smaller, and the lip on the rear interfered with the Type 3 brake back plate.

A quick trip around the warehouse – just one of the benefits of doing a job like this in the workshop at JK HQ – and we had a set of late Beetle-style back plates and matching wheel cylinders, shoes and hub seals. This all bolted straight onto the rear of the Type 3, with a combination of Beetle and Type 3 parts to make the handbrake work. 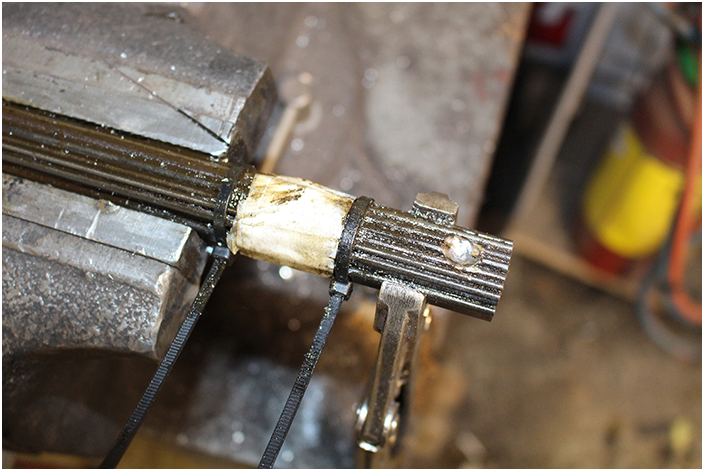 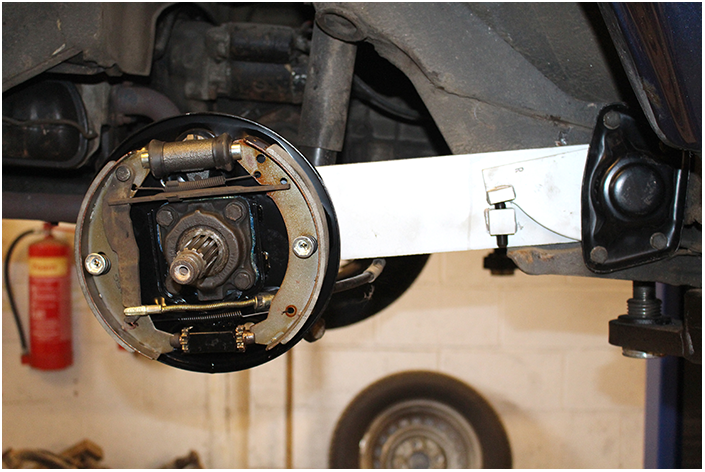 Last job was to lower the rear to match the front. This time it was obvious it wasn’t going to be straightforward as, although the Brazilian Type 3 has standard swing axle rear suspension, it also has longer than normal torsion bars that protrude through the spring plates. Luckily, various members of staff at JK have projects and parts stored in and around the yard. We turned to Ian Weener (Goods In) who has an IRS floor pan that, for some unknown reason, had been converted to swing axle.
This gave up its torsion bars, which slotted straight into the Type 3. Once in place, we added a set of JK Beetle adjustable rear spring plates, new bushes, torsion bar cover plates and a fresh set of rear shock absorbers. 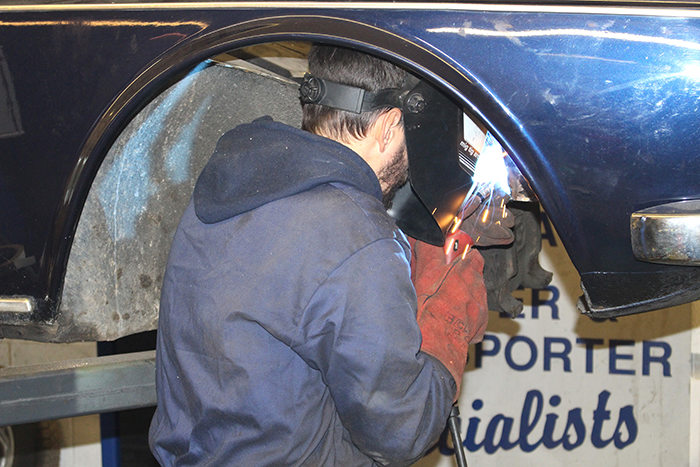 Final job was to bolt on a set of polished EMPI Fuchs-style wheels, 4.5 x 15s on the front with 145/45-15 tyres and 5.5 x 15s with 165/65-15s on the rear. In truth, there was a great deal of discussion about whether to detail the spokes first but, in the end, it was decided to leave them in the polished finish as we felt the extra chrome suited the car. That and were were too lazy to mask the damned things!

With everything bolted up tight, we couldn’t wait to drop the car on the ground and check out the stance. A bit of fiddling with some wooden blocks to get it o the ramp and it hit the floor, literally. As usual, we had been a little over enthusiastic and had the adjusters set too low. No matter, a quick turn of the Allen bolts front and rear and the car sat on a slight rake with a profile we were happy with. 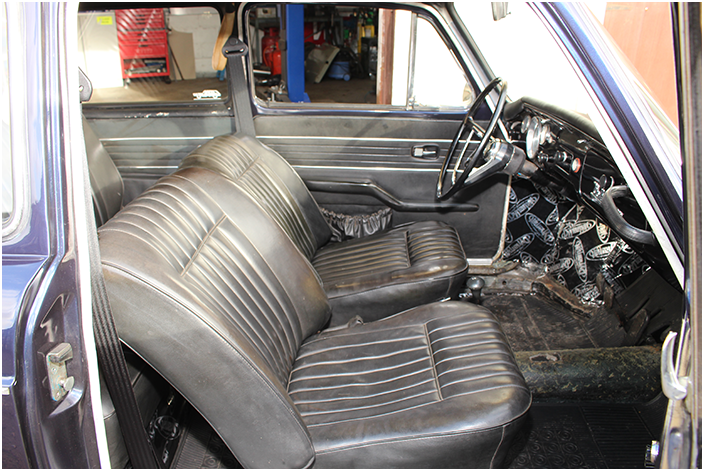 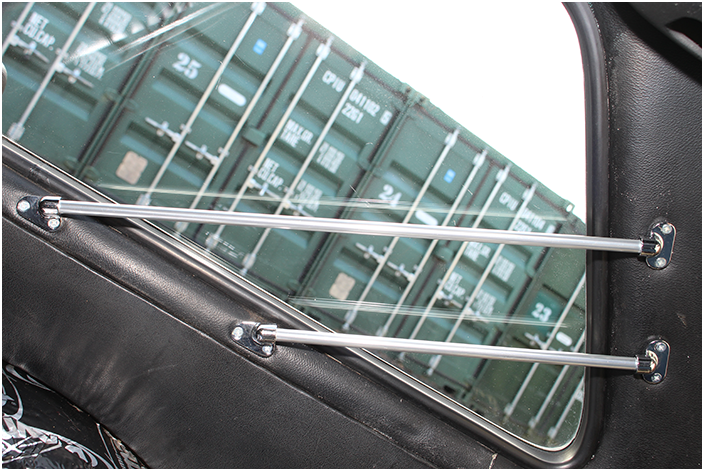 Back up on the ramp, both front wheel tubs were enlarged by three inches to give more clearance for the tyres and then welded back in place. Job done. Err, not quite. Due to the modified tank mounts, the stock petrol tank now didn’t t. We considered our options, and even trial fitted a JK Buggy tank in place, but then decided to modify the original tank so we can retain the factory fuel gauge. With the metalwork completed, we gave the underside a coat of Dinitrol 4941 underseal and used Dinitrol 445 stone chip on the inside of the boot area so everything is sealed and protected. 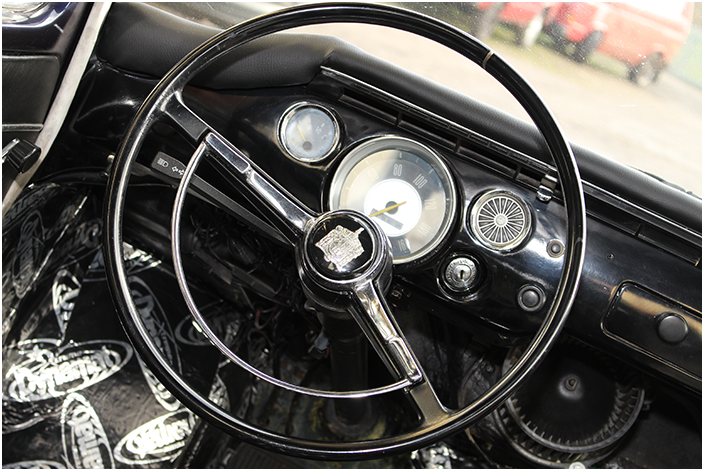 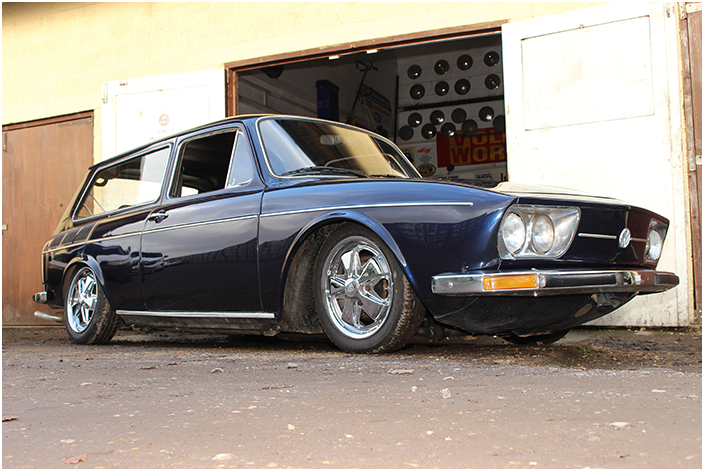 Moving onto the engine, as the car is now going to be driven in the UK, not Brazil, we removed the standard, and very restrictive, back box and j-pipes. These were replaced with a pair of Beetle heat exchangers and Bay Window concertina pipes, with a combination of hoses and fittings to make the heating work again. Alex cut down and shortened an EMPI Type 3 exhaust header to t, and bolted up a single quiet pack silencer.

The finishing touch is a set of modified Type 25 jail bars, which Alex shortened and curved in two directions to follow the curve of the rear window. Once in place, a set of side bars were added to complete this neat and quirky addition.

The JK Type 3 is now complete, for the time being at least. It will be used as a test bed for products, for visiting local traders, runs down the shops for sandwiches at lunch time and as a pool car if a member of staff wants to go to a show but their own VW is out of action.

Hopefully, you’ll see it out and about and be able to check out this unusual Volkswagen for yourself!