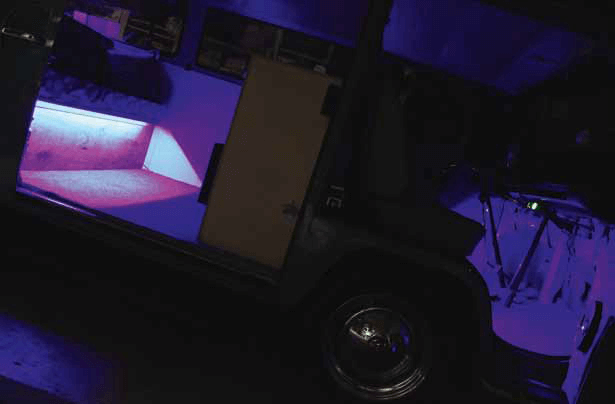 How To Add Mood Lighting

Just Kampers Written By Jim Blackstock
More from this author

How To Add Mood Lighting

LEDs have a number of advantages over conventional lights, not least of which they allow you to tune the mood of your Bus to your disposition.

Ask any electrician and they’ll tell you the future of lighting is LED.  Light-emitting diodes are small, versatile, use far less energy than conventional lights for comparable output and last a lot longer.  Win win all round then.  Because of this versatility and low power consumption, we have seen them becoming more and more popular in Buses recently, so we thought it would be a good time to look at how to fit a string of LEDs.

There are a number of different ways to fit LEDs, and they can be used purely for lighting, or to create complex lighting effects, or to highlight particular bits of furniture or trim work.  In our case, we decided to create some subtle mood lighting in an Early Bay Window, but the principles here can be applied to any application.   We split our lighting into 3 zones – in the base of the rock ‘n’ roll bed to create a pool of light in the rear, at the bottom of the front seats to light under the dash area and either side of the roof locker, creating areas of light high up in the rear.

We also wanted all three to work independently but, instead of opting for a bank of separate switches, we decided to install a remote switch option, with control from a four-way key fob.

We think the results are a good contrast with the standard lighting in the Bus and offer something a bit more suited to chilled-out evenings with some mellow tunes and a bottle or three of beer. 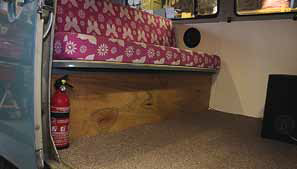 The first thing is to decide where you want to put your LEDs.  As we wanted mood lighting, we decided to start with some in the base of the rock ‘n’ roll bed, which would cast a low-level pool of light, as opposed to something with much harder edges and shadows. 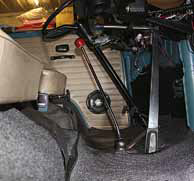 We also wanted to bring some light into the front foot wells of the Bus, so decided to add some LEDs to the base of each of the front seats. 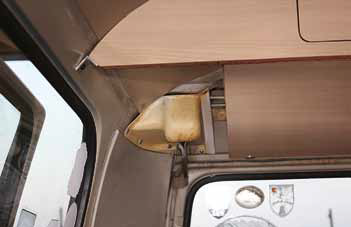 Finally we decided to add some either side of the roof locker to create some high-level light in the rear, particularly for when we’re sleeping in the Bus at shows. 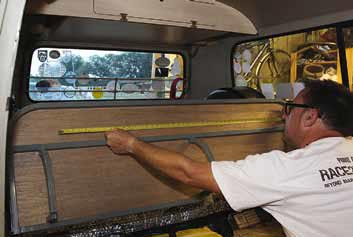 Returning to the rear seat, the first job is to measure the width of the base to see how long an LED strip we would need.  1200mm looked to be just about ideal.

We then needed to find out where 1200mm fell on the LED string.  As you can see, it’s slightly more than one of the white lines, which indicate where you can cut the strip.  This is not a critical measurement, so we cut it slightly shorter at around 1184mm. 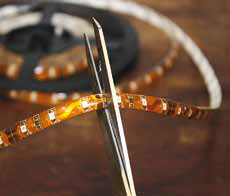 Because of the way the strip of LEDs is made, you can only cut it at the white lines.  Anywhere else and you will break the connection.  A decent pair of scissors is all that’s needed to trim the strip to length. 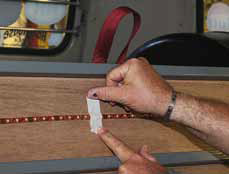 Now roughly tape the strip to the bottom of the seat base to work out the best position to mount it.  Open and close the seat base and check nothing interferes with your chosen position. 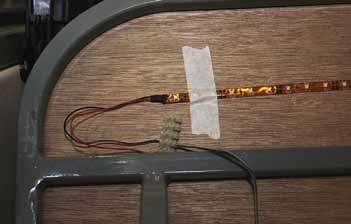 We roughly wired the strip up, using the wires already fitted to the free end of the strip so we could check how they looked in operation.  This will be much neater when we do our final fix.

Ta-da!  With an earth connected to the strip (using a fused feed of course) we checked everything worked as it should… 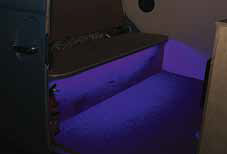 … then waited until dark so we could get an idea of the effect they would give at night.  We tried several positions for the LED strip before deciding to mount it as far forward as we could. 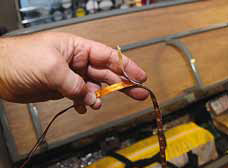 The LED strip has a pretty good adhesive strip on the back to mount it so; once you’re happy with the effect, peel off the backing strip before sticking it to the seat base.

Clean the underside of the seat base first, then peel off the backing a short section at a time, smoothing it on as you go.  Make sure you leave plenty of wire running into the base area.

Normally, once you’ve cut off what you need, the rest of LED strip is scrap, but we won’t accept that sort of wastage, so cut the remains of our strip into four more equal length sections.

This is what happens when you cut between the white lines – a break right through the middle of the copper tracks that join each section of LEDs.  Don’t worry; to re-use these sections is pretty straightforward.

Firstly, cut back the plastic cover that sits over the connections and the LEDs themselves and remove the portion that sits above the two copper tracks.

You will now be left with two exposed connections, one positive and one negative.  Note the ‘+’ marked on the right hand track. 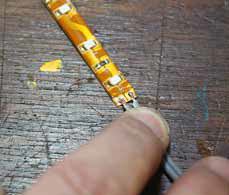 To re-use the strip, you need to solder wires onto the exposed tracks, replicating the connection that came with the roll.  We applied a little solder to each of the exposed wires before we started. 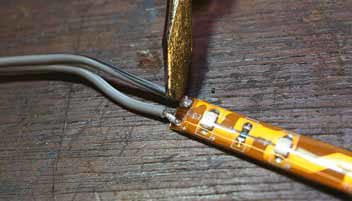 With the soldering iron, we added a blob of solder to each of the two connections on the LED strip, then warmed them up and slid in the wires.  When the two blobs of solder flow together, you should have a connection. 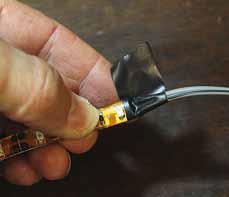 Give the join a light tug and then a dab across battery terminals to make sure it works, and then wrap the connection in insulating tape.

And here we have our remaining four strips, ready for fitting to the base of the front seats and the side panels of the roof locker. 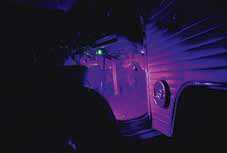 As you can see, the result of the LEDs in the front foot wells is pretty nice – bright enough to be cool, but not distracting or over the top. 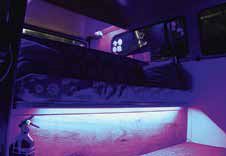 Similarly, the effect in the rear, with the higher pools and the lower area, give a mellow spread of light.

And so to control it.  We opted for a four-channel remote switch from Maplin so we could control each area independently.  It came with a remote key fob with sliding cover to prevent it being switched on accidentally.  This is the unit disassembled. 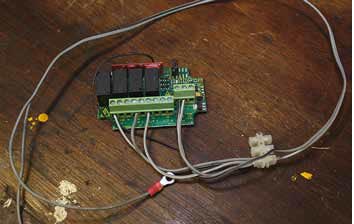 We made up a wiring loom to connect the three strips as per the instructions.  A common live feeds the switch itself (via the three-way connecter on the right) and each of the switching relays (labelled O/P 1-4). 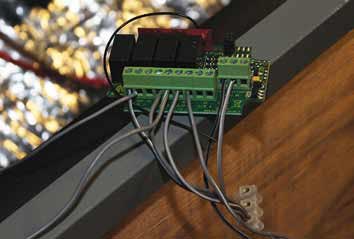 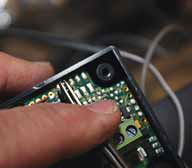 We then had to code the remote to the receiver.  Instructions to do this will either be included with the kit, or can be found online.  We shorted across the LEARN tabs (the left one of the two) and the relays buzzed.  A press on the remote and they were paired, ready to go. 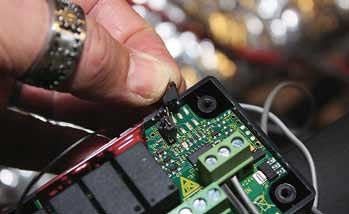 The receiver was supplied in ‘Momentary’ mode, meaning the lights would come on only when the switch was held down.  Removing this tab from the second right, right-hand terminal post changed this to ‘Latching’, where one press turns it on, another turns it off. 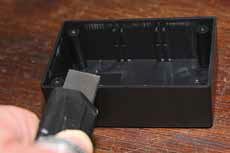 The housing for the received is supplied without any cut-outs, so we trimmed an appropriate sized opening into the side with a craft knife. 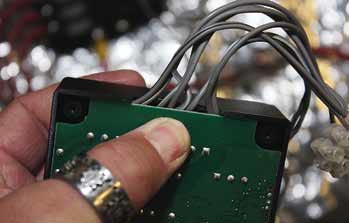 With the cut-out finished, we could set the wires into the box, ready to close it up. 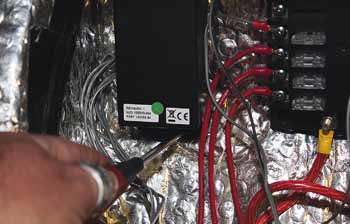 Once done, we fitted it to the rear bulkhead out of the way, next to the fusebox that supplies it with power, and with a common ground for all three strips.

Job done.  We now have three areas of mood lighting, all controlled independently from a key fob on the Bus’ keys.  Just add beer …