Daylight Savings – A Weekend of Shows with the JK Variant

Just Kampers Written By Chris Marshall
More from this author

Daylight Savings – A Weekend of Shows with the JK Variant

It was here, finally. That time of year where you magically gain an extra hour of sunshine and the temperatures hit over 10 degrees making the weather feel absolutely tropical compared to the last few months of miserable jumper and raincoat weather.

It also marks the start of Sunday show / car meet / hang about in a field and see a load of friends season and this Sunday was the first meeting of one of our favourite local meets. Run by the Crotchcooler guys at the departure lounge café just outside of Alton, it always promises a good turnout and a good mix of cars to whet your appetite and provide some much needed motivation for existing projects.

Bearing this in mind, I picked up the JK Variant on the Friday evening after work, as it was an early start the next day. I left my daily in the carpark and hit the open road. Even though the variant had just been to Belgium and back with no trouble at all, I had a little bit of apprehension at taking it. This is down to the fact I possess an amazing ability to break down! I have blown engines, gearboxes, bent con rods and had problems using staff vehicles where no one else has (please don’t ask about the grey syncro experience). But we were away!

The sun was beaming down, I had forgotten my sunglasses and I was happily squinting my way down the motorway towards home. Everything was going great, but the gods of speed gave me a little reminder the offerings had been light of recent and about a half mile from home the Variant cut out and we had to pull over. Luckily, we managed to go straight into a layby which even luckier was opposite a petrol station - I have a particular brand of bad luck which is affectionately known as good, bad luck. After a quick call to confirm my suspicions that the fuel gauge doesn’t work it turned out that there were 2 jerry cans in the bonnet. Ideal!

Once topped up and all back together. A quick flick of the key produced nothing, but a whole load of cranking and no firing.

I pulled the pipes off the fuel pump and it didn’t seem to be coming through, so I put in the second can and again with Chet on the end of the phone put some straight down the carbs. Surely this must be it! But no, nada, nothing and with the continued cranking the battery started to get a little bit weaker and the engine getting slower at turning over. It became apparent that there was no spark and by now the variant was most likely flooded. A quick check on the coil and the leads which were all fine led to some head scratching, but a quick fiddle with the retro fitted kill switch in sync with turning the key and we were running again! A quick put the car back together and the last half mile was done, we were home safe and a victory beer was consumed. 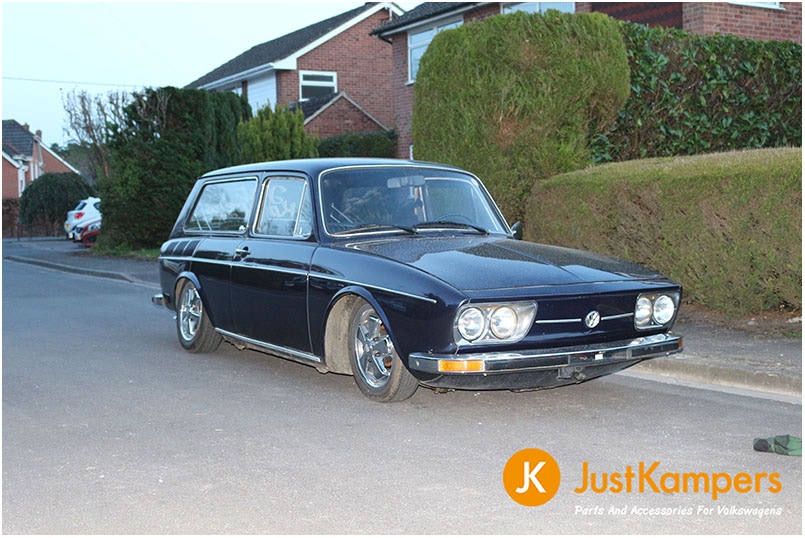 One of the main reasons for taking the variant on the Friday and not just picking it up on the Sunday was down to the fact Saturday was the first Saturday of the month and this means it was workshop breakfast day. This is a highly exciting event as it not only includes an all you can eat cooked morning delights, but also the guys that I share with dig out their toys and have a mini convoy down. Normally I would jump in as a passenger, but not this month! Because of actually having something to drive I could partake and be one of the “cool kids” and with this in mind I eagerly raced out of home and jumped into the variant in the early hours of Saturday morning. 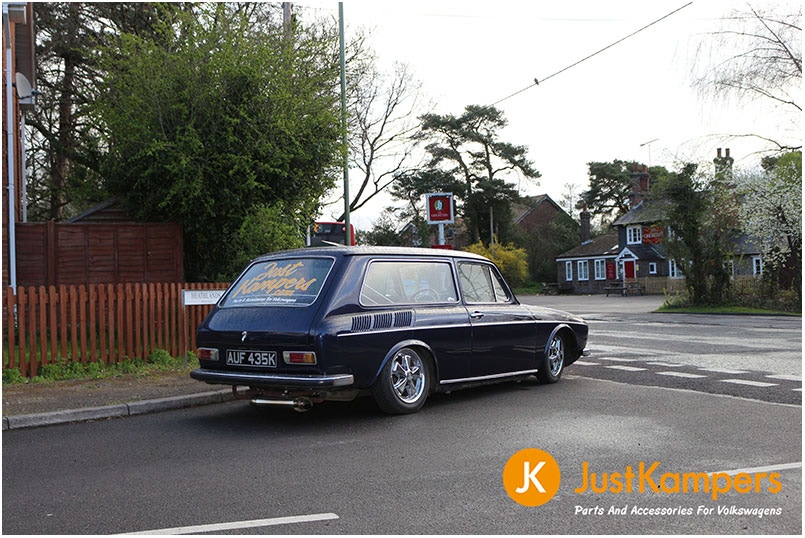 Now if you live within a 10 mile radius and wanted a lie in on Saturday morning, let me apologise to you now. It had been a cold night and because of the variant having no choke units, it took a little bit to get it going, but it did cough into life fairly painlessly and luckily I couldn’t see any curtains twitching as it really was very early. Now the intended plan was to leave home, head to the workshop, meet the guys and head on over to get something to eat. That was the intended plan anyway, but again the gods of speed, the universe or the variant itself had other ideas. There’s nothing in this world which makes you feel cooler than passing a group of people waiting for the bus. This feeling  of coolness can soon leave though, especially if you break down in front of said group of bus goers and have to push the car back down the road. If any of them were considering a classic car, they were definitely put off at this point. 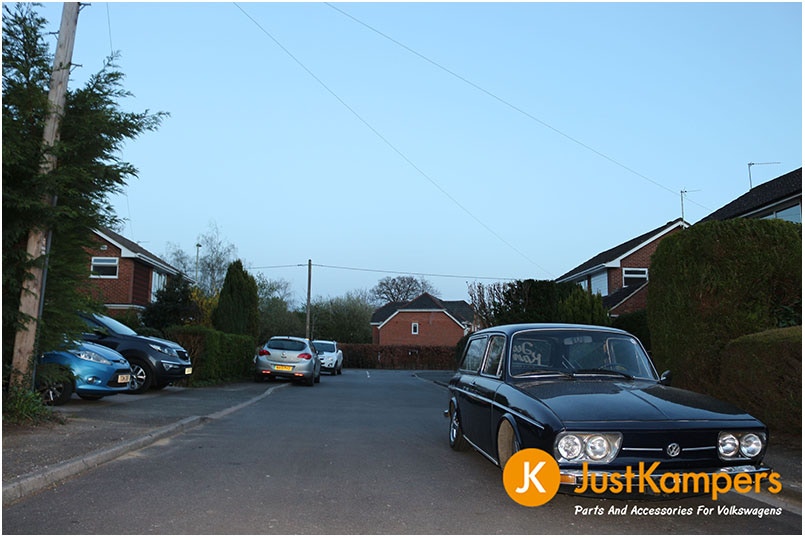 Without going into too much detail I narrowed down the running issue to the kill switch someone had wired in and that the variant would only run with it held in all the time. Personally I lack the ever important 3rd arm which would have been needed to hold this in, steer and change gear whilst driving a simple, but effective fix was applied. We won’t go into details of this mechanically brilliant problem solver, but sellotape is definitely involved. After this we were away! But only to half throttle before it cut out again. A little bit of looking and it turned out the airbox hadn’t seated properly onto the carbs, so a quick fiddle and we were all good. In your face bus goers!  A quick stop into the petrol station where things got a bit emotional over the dispensing of fuel – I swear the front number plate was on when I left – and the run into town was undertaken with much enthuisiasm. 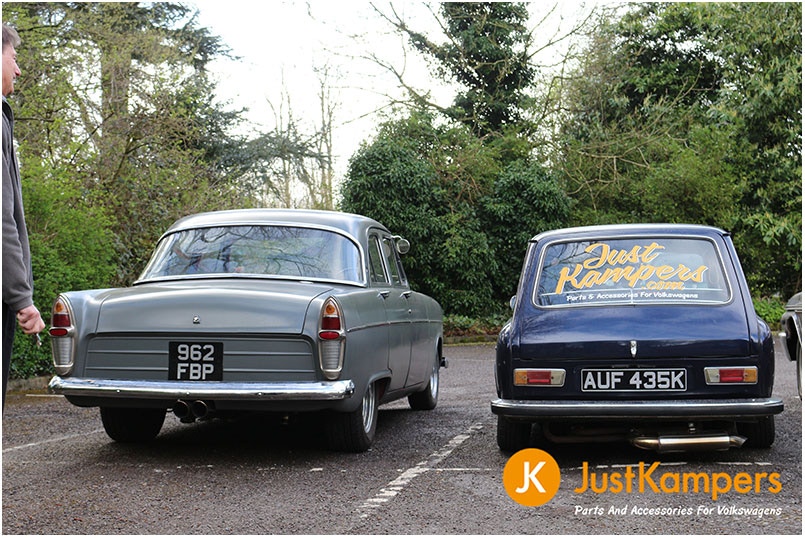 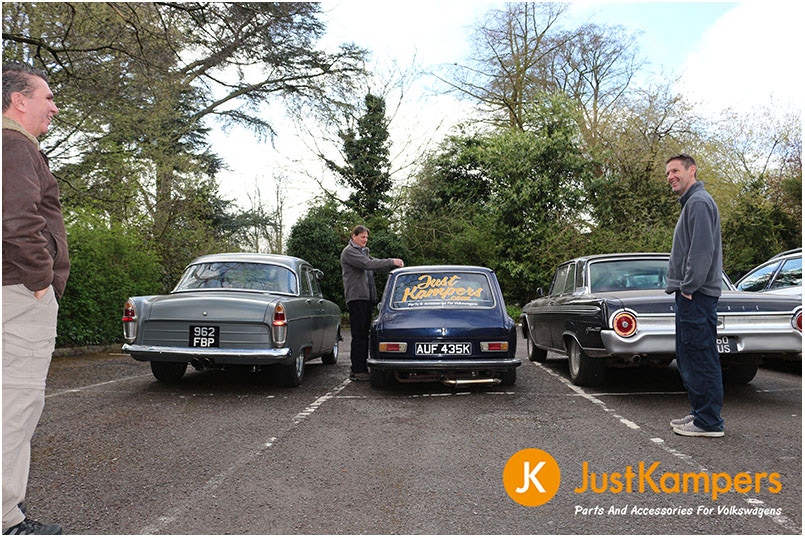 Unfortunately  by the time I got there everyone had pretty much finished so I met them outside where the variant was hidden from sight by a galaxie 500 much to their amusement. 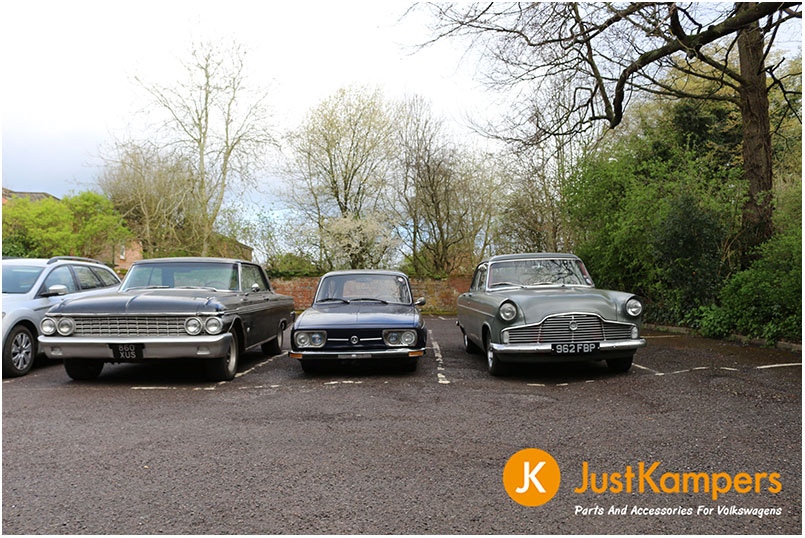 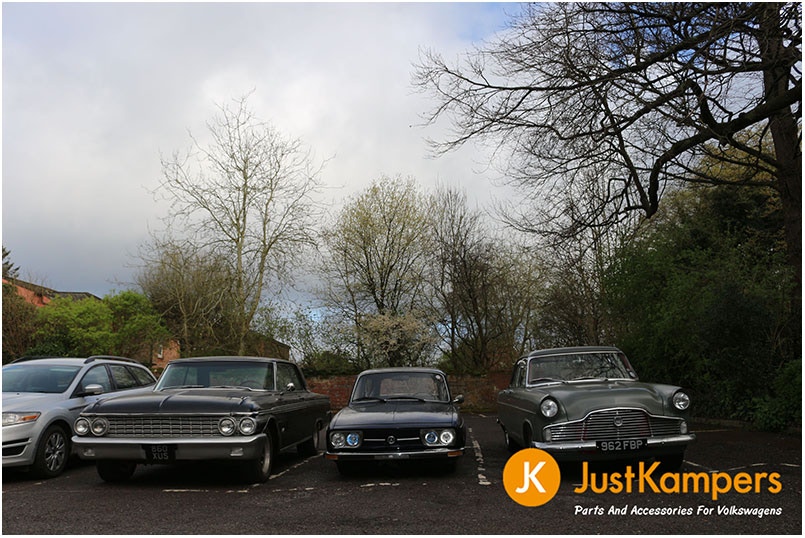 With breakfast well and truly missed I now had to kill some time before having to go and view a house with my other half. Luckily for her she’s been co piloting on some of these adventures of breaking down or having to come and pick me up at the side of the road – don’t ask her about the time I snapped a rod on Christmas eve, which happened to be while she was out for dinner on her mums birthday. Or the time I blew the end off a gearbox. And definitely don’t ask about the time we took the work syncro to Birmingham. So when she heard I had a car borrowed for the weekend, she decided to make her own way to the house viewing and made it very clear she would be staying in another county until said time of house viewing.

With all this in mind I devised a cunning plan of working my way back home via workshops – mine first, then to the house, then to a friends which was just round the corner from the viewing and my place. With time thoroughly wasted at my unit as I wasn’t allowed to get dirty I went to become an adult and try to buy a house. 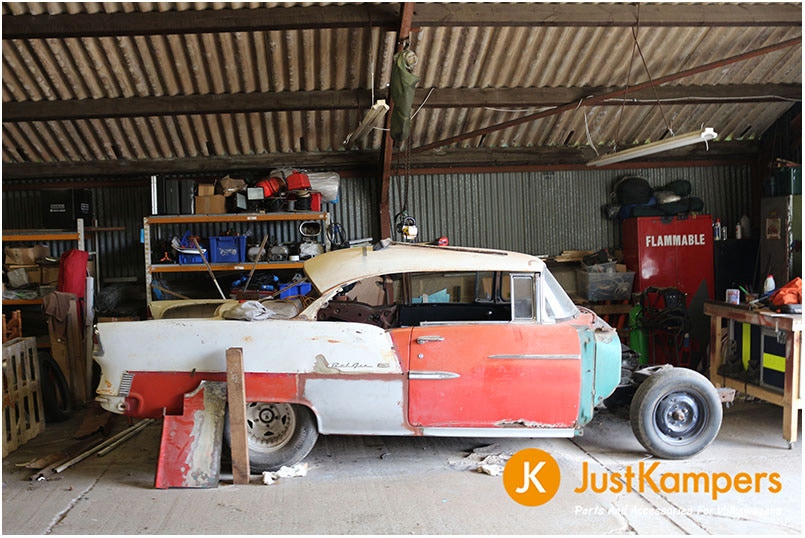 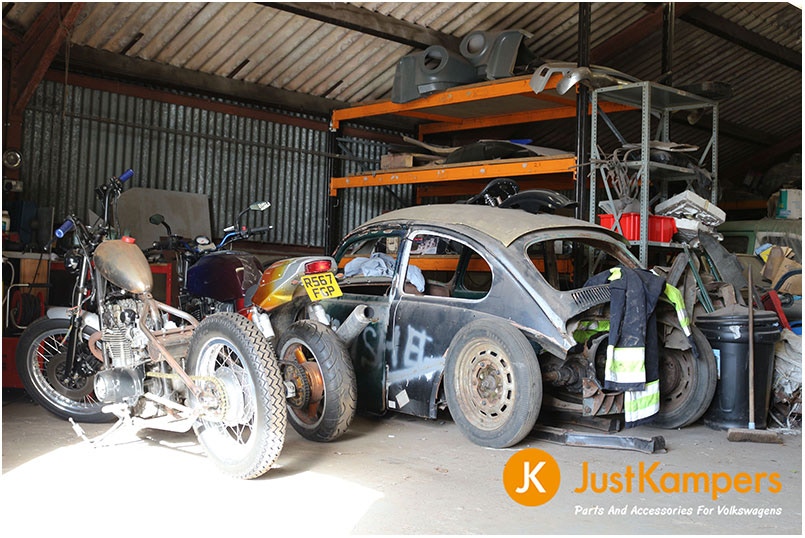 This went without a hitch and due to missing breakfast and having to discuss grown up matters we left and went to re-enact our own version of cars and coffee – albeit light on the car turnout and no coffee was consumed. Just as we were leaving a T6 on air and wheels rolled into the drive through and I thought it never ceases to amaze me the market for T5 and T6’s – the sheer amount on the road being used as work vehicles, toys, family vehicles or whatever. They may not be everyone’s cup of tea, but there is no denying the fact the market is huge and a bit of a VW success story. 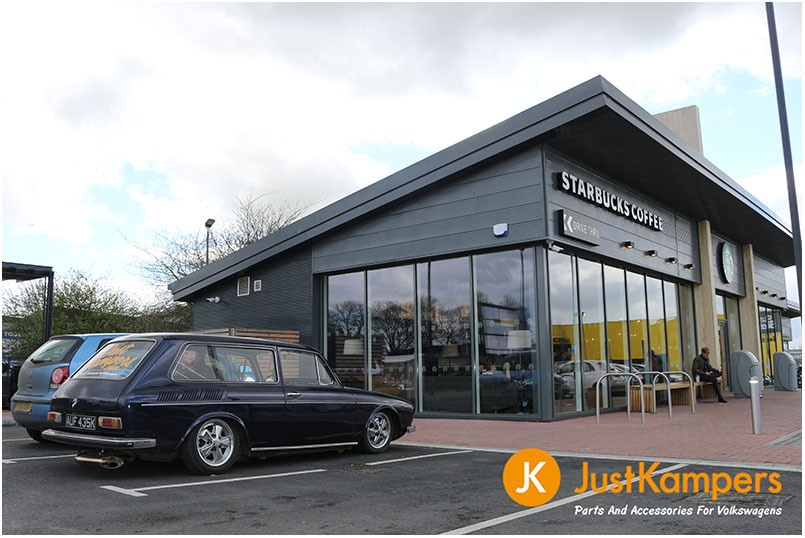 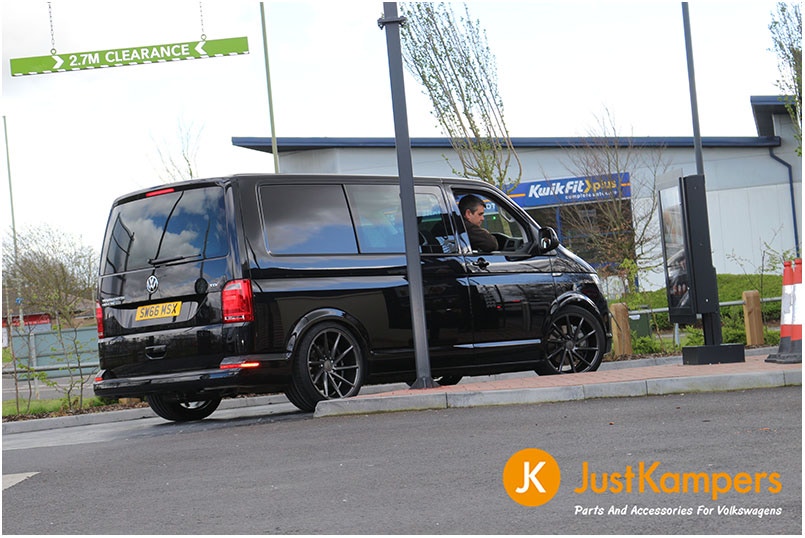 From here I went on down to a friend’s unit for a catch up and drop some bits off for one of the bike projects on the go. There’s not much to say really, but on the way out I scraped over a bump hard enough it made me wince a bit. Later on that day I got a message asking if I needed the jacking point back as it had removed itself on said bump. 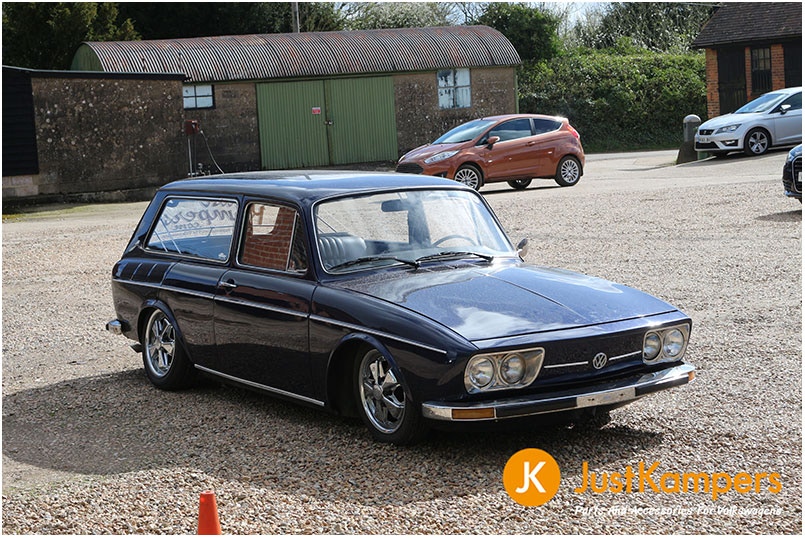 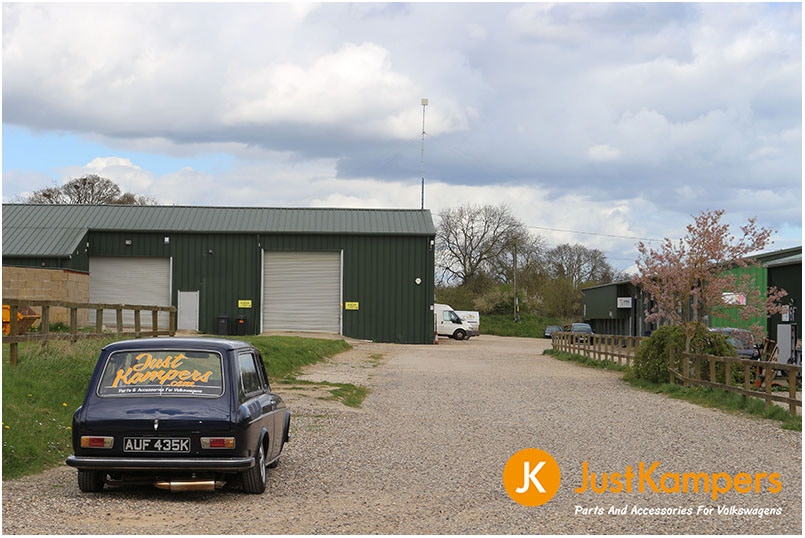 This was it Sunday was here! Show day, sun beaming down, sunglasses in the daily with the girlfriend and dogs who had gone to the beach and instructed me not to get in contact if it all went wrong. The sunshine brought out everyone in and on their toys and part of me wished I had my bike out. 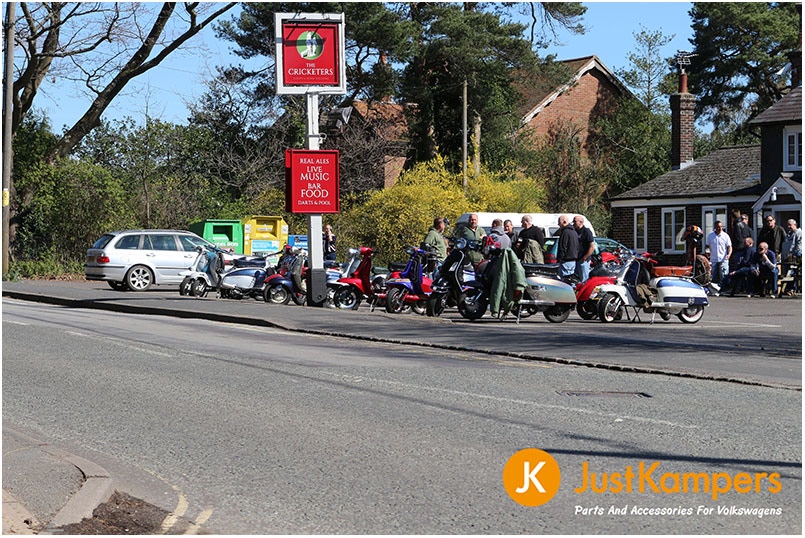 This soon quickly vanished as I got a few stares and thumbs ups as I bounced my way down the road to the other petrol station. My round trip was going to be about 50 miles and there was no way I was being caught out again. All filled up and ready to go I planned my route strategically to rendezvous with the wicked step mother. She’s not wicked as in the wicked witch, but has a bay window and rides a Ducati, so is wicked as in rad, gnarly, sick or whatever 90’s saying suits. This route encompassed 3 high streets with the last one being Fleet where I could partake in a favourite past time of making pedestrians jump as you go over the speed bumps. This was all completed painlessly and before I knew it I was at the parents’ house and we were off!, even managing to pick up another bay window en route. 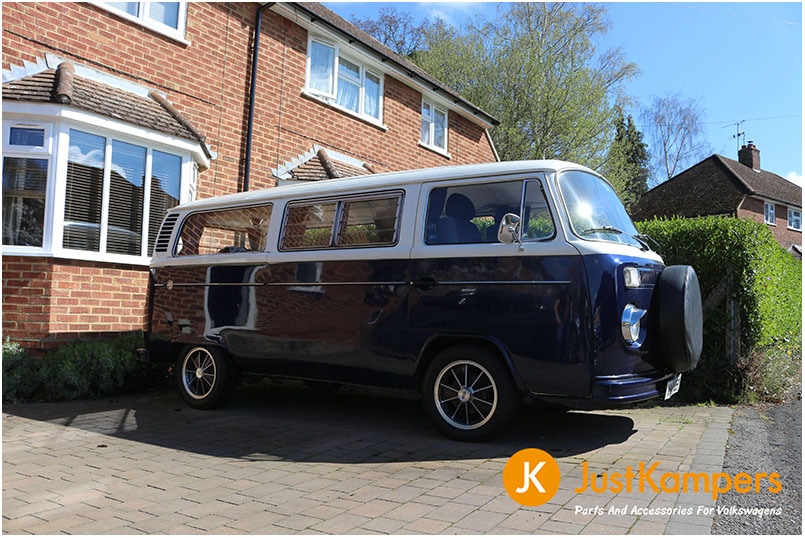 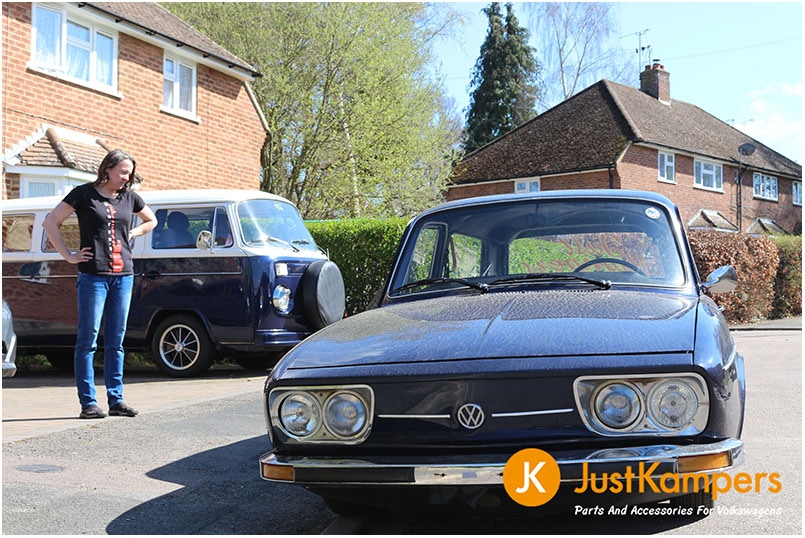 We arrived at the lounge about half an hour after it started and were greeted by a field full of shiny and not so shiny metal. As we rolled in one of the organisers told us the field was full and there was nowhere to park and almost just to abandon them wherever possible. This was a good sign – unfortunately around this way a few local shows have died off over the last few years – and means the show is going from strength to strength.

We had a good chat with a few people about our new lowered front beam, which was being proudly displayed on the Variant.

I won’t bore you with major details as this is probably more than enough to read through, but my good bad luck kicked in again – the camera died, so bad luck in not as many photos as possible, but good luck as it meant I got to enjoy the show with less commitment.

If you wish to attend the next meet is Sunday the 7th of May and kicks off about 2pm. 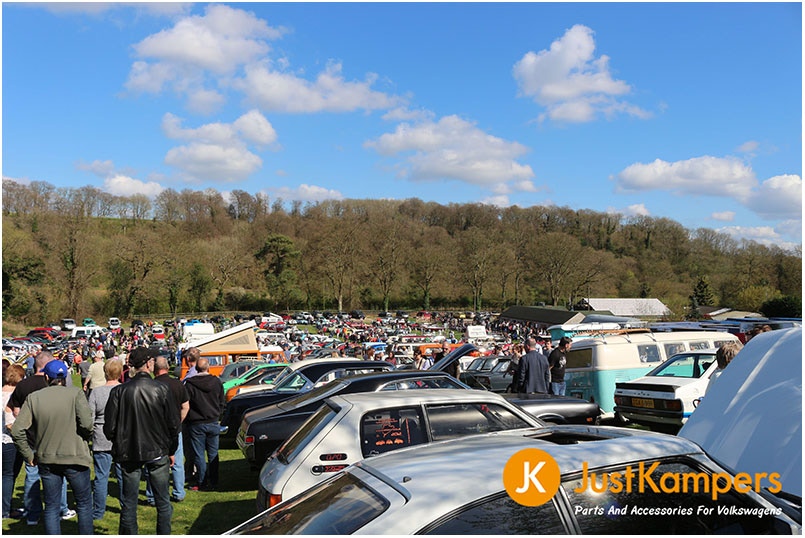 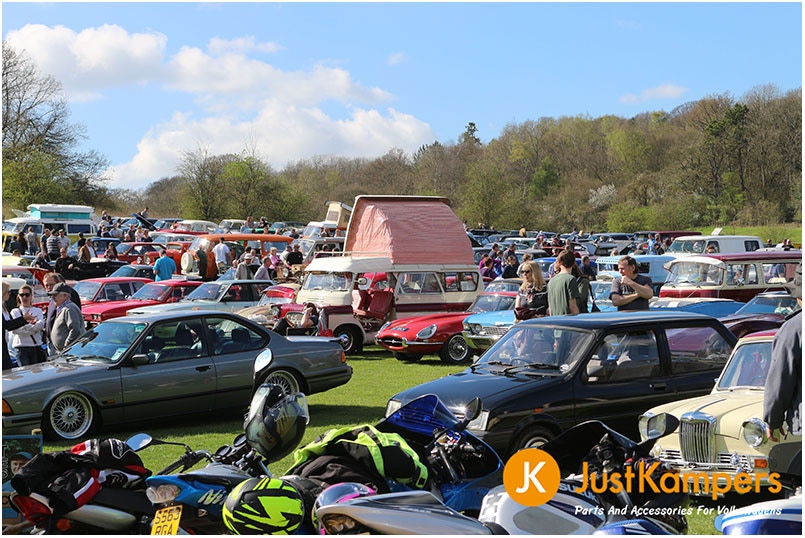 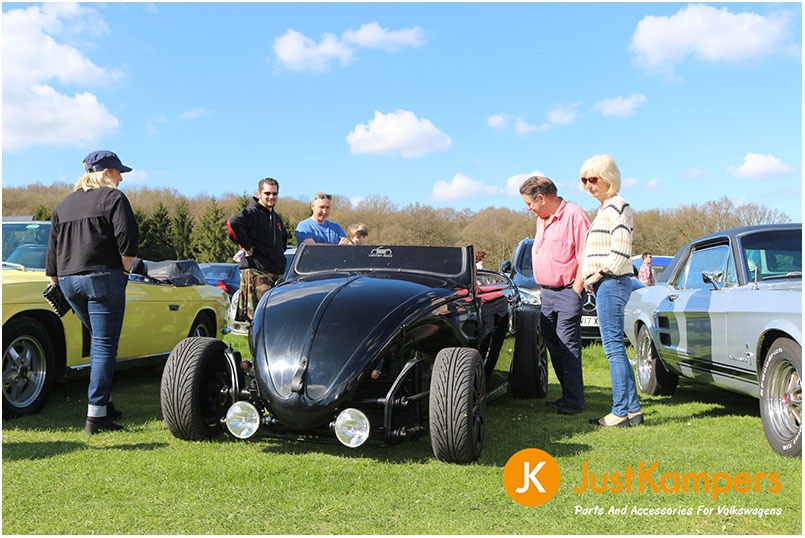 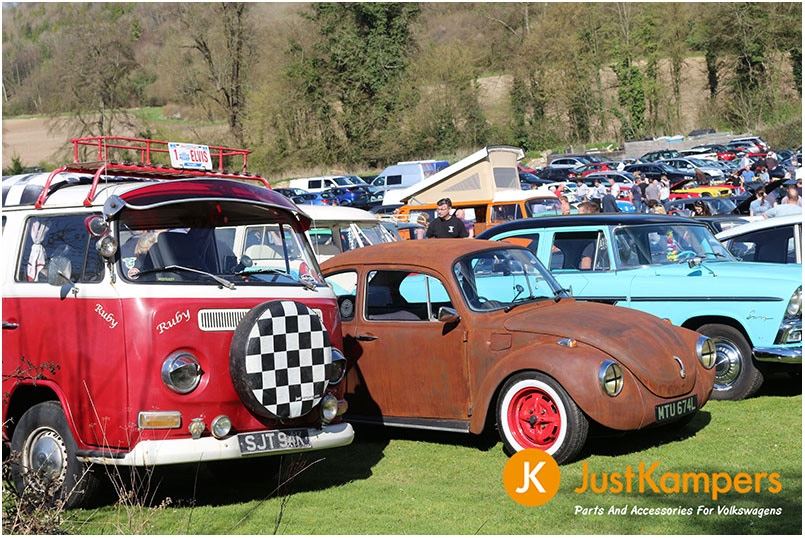 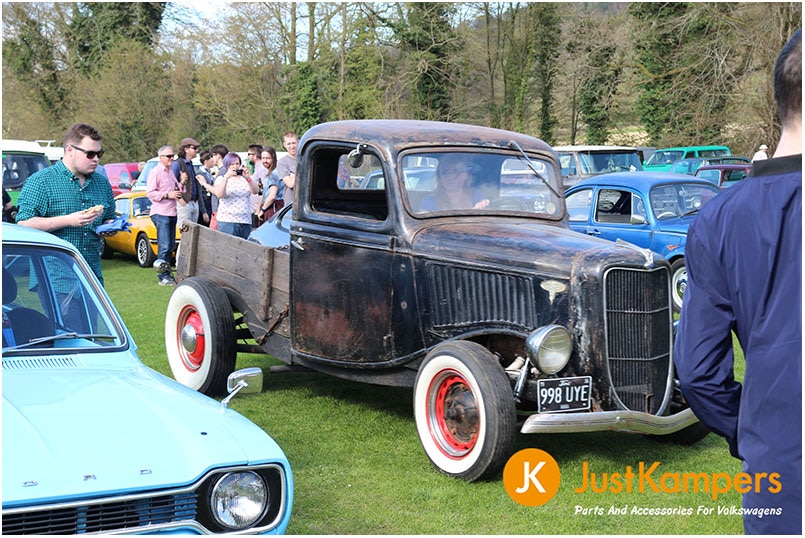 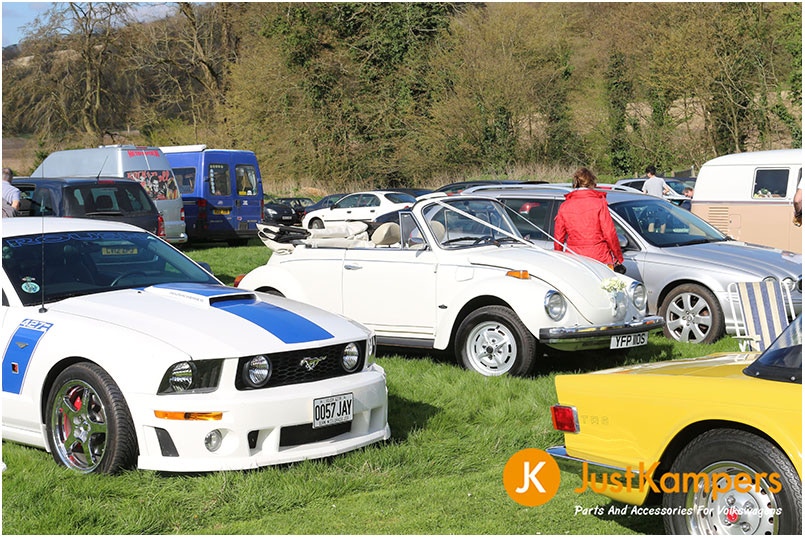 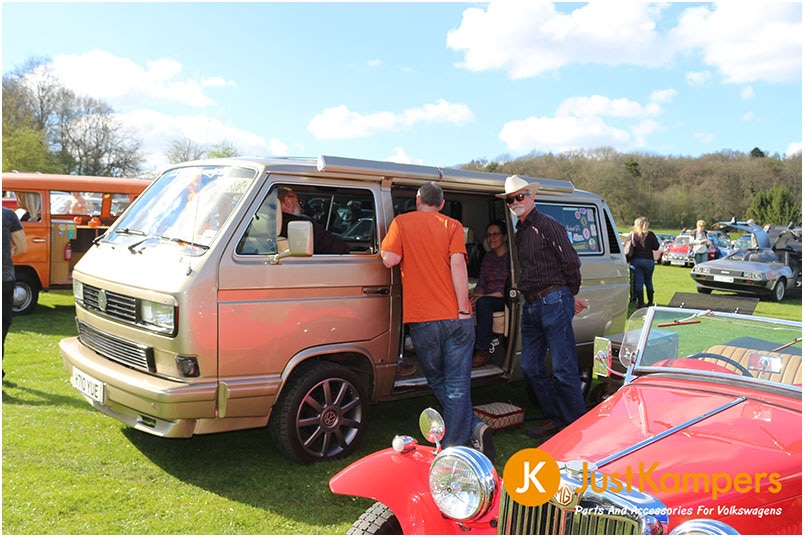 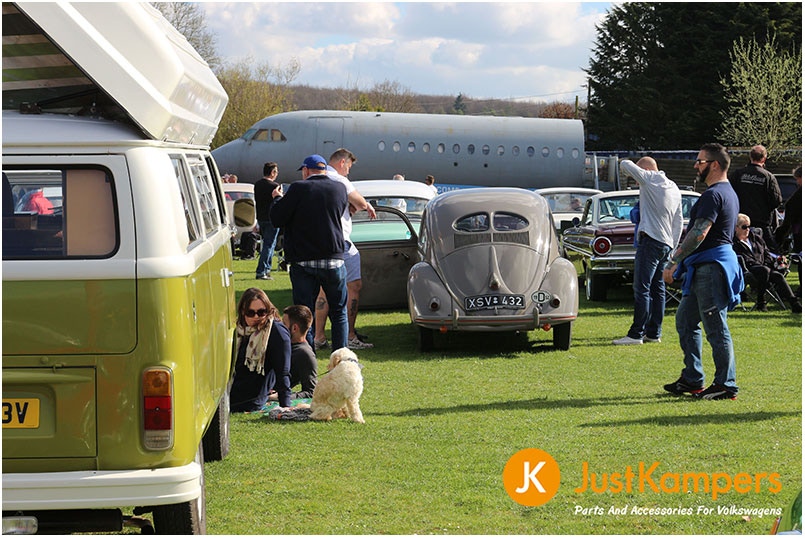